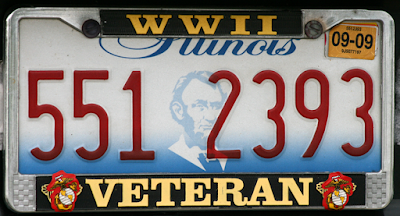 What should I see in Downtown Crystal Lake, but a World War II license plate holder.

The Army’s D-Day web site introduces the subject with this:

“June 6, 1944, 160,000 Allied troops landed along a 50-mile stretch of heavily-fortified French coastline to fight Nazi Germany on the beaches of Normandy, France.

“General Dwight D. Eisenhower called the operation a crusade in which ‘we will accept nothing less than full victory.’

“The D-Day cost was high -more than 9,000 Allied Soldiers were killed or wounded — but more than 100,000 Soldiers began the march across Europe to defeat Hitler.” 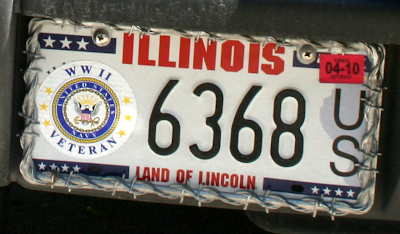 He has a World War II license plate. He was in the Pacific theater, as was my father-in-law Vince Giangrasso. Both live in Wonder Lake.