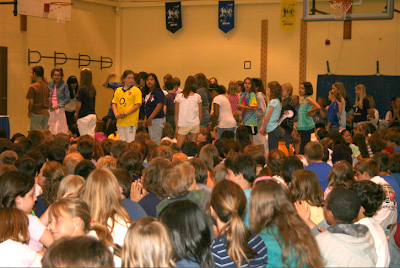 I’m not sure it was really a graduation ceremony, but fifth graders at South Elementary School were in the auditorium getting recognized for various accomplishments.

The last was for the recently departed Librarian Cheri Pearl. Her death this past spring cast a pall on the entire school.

My son has attended funerals when he was younger, but he didn’t want to go to Mrs. Pearl’s. He was too sad.

Part of the reason was undoubtedly that Mrs. Pearl’s daughter, Tricia, was both my son’s third and fifth grade teacher. But every student gets to know the librarian.

A collection was taken and the $800 raised will go toward the creation of a patriotic corner in the school library.

Mrs. Judith Ferretti read what was on the plaque for the crowd and held it up at an angle where my flash would not reflect from it.

It has a picture of Mrs. Pearl and her dog. It reads (click to enlarge):

Cheri Pearl
Family, Friends, Children,
Books and Patriotism!
We will forever keep her in our hearts.

I looked for pictures of her dancing at the New Year’s Eve wedding of Mackenzie Walter to Carlos Garcia, but couldn’t spot her. Maybe if you click on the images of the folks dancing up a storm, as she was that night, you will find her. She certainly was more than holding her own.