With Lisa Madigan making the rational decision to stay in an office that will allow her to maximize her time with her young children, the discussion today in the Franks family is bound to have been

Being an attorney, having high name identification, good contacts with Chicago Alderman Dick Mell and his allies and enough money in the family to put on a real campaign, not to mention an active contributor base, Jack Franks would have had a shot at winning a statewide primary for attorney general.

It looks like there are going to be two open statewide offices:

In the worst way, State Comptroller Dan Hynes doesn’t want to run for a fourth term. He’s even thinking about running against Governor Pat Quinn in the Democratic Party primary.

Why would the state comptroller want to run for state treasurer or lieutenant governor?

He could still run for lieutenant governor.

Look how it turned out for Pat Quinn.

State Treasurer Alexi Giannoulias is off and running for the U.S. Senate. Although wounded by the poor performance of the Bright Start college savings plan, he probably can take out Rod Blagojevich choice Rolland Burris.

Would Franks be more interested in running for state treasurer or lieutenant governor?

My guess is the latter.

Franks has not concentrated on financial issues. But he does have banking connections and bankers have been trained to give money to state treasurers for over 50 years. ($100 per year per $100,000 put in one’s bank, Harvard banker Joe Crabb—a former county official in Wisconsin–told me when I was McHenry County Treasurer.)

Franks is more of a generalist.

If there were a “Headliner of the Month” award, Franks would win it.

It doesn’t really matter than the drug purchase plan that Blagojevich co-opted when he took office in 2003 wasn’t much of a success.

Franks got publicity on a popular issue.

I can’t tell you what issue he moved on to, but it was another populist promotion.

Although Franks’ recall constitutional amendment is clearly inadequate, Franks has the reputation of a reformer.

That probably comes from his falling out with Blagojevich and the blood feud that resulted.

Before the breakdown of trust, Franks asked Blagojevich for the appointments that can be found here.

Franks, of course, got back at the ex-governor receiving more publicity during Blagojevich’s impeachment trial.

Franks has even developed a niche following with his opposition to the expansion of gambling, a subject on which conservatives and liberals agree.

Not only has he urged Governor Pat Quinn to veto the capital construction bill because it will put five slot machines in every establishment with a liquor license, he is not a newcomer to that position. Back in 2006, he opposed Governor Blagojevich’s attempt to spread keno all over the state. 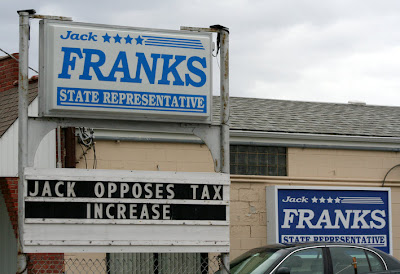 And, Franks has made it quite clear he will not vote for an income tax hike, unlike his Republican State Senator Pam Althoff, who seems to be flirting with the idea.

Other state legislators like Julie Hamos want to run for statewide office, but, with her sponsorship of the tripling of the RTA sales tax, which was apparently not enough to keep the CTA afloat with drastic cutbacks in service, opponent Franks could make some really interesting TV ad comparisons.

Of course, Hamos might point to the Franks’ law firm’s involvement with the Crystal Lake Mercy Hospital application before the Illinois Health Facilities Planning Board.

If she faced off against Franks, she would pick up the gay and pro-choice activists.

Initially, Franks was not endorsed by Personal PAC, the most fervent pro-abortion political action committee in the state.

But less strident pro-choicers in the Democratic Party (am I being redundant?) might have been mollified by the pro-life demonstration in front of his Woodstock office. It took a lot of work.

That might count for something in the general election or it might make no difference if Franks were tied to the Democratic Party candidate for governor.

So, what will Franks run for?

My guess is lieutenant governor.

Franks probably has higher name identification that Comptroller Hynes and on the excitement scale, Franks scores big time against Hynes.

It is doubtful they would run against each other, however. Franks has been a supporter of Hynes and undoubtedly father Herb Franks has longtime connections with the comptroller’s father former State Senate President and Cook County Assessor Tom Hynes.

Any statewide candidacy by Franks might set off a battle in the Republican Party for the nomination for his state representative seat.

Conservatives might just cede the seat to Woodstock Mayor Brian Sager without a fight. Sager has recently retired as Interim President of McHenry County College. (Thirteen months ago, I pegged him a candidate-presumptive.)

Would there even be a Democratic Party candidate?

I can’t think of one who could not be beaten by a unified Republican Party. The Democrats do not have much of a farm team yet.