Knocked out of his seat by McHenry County Democratic Party Chair Kathy Bergan Schmidt last year, Republican Nick Provenzano is running for the GOP nomination in next February’s primary election.

From the list of those endorsing him found below his press release, one can easily say that he has done his homework in an attempt to preempt other candidacies. 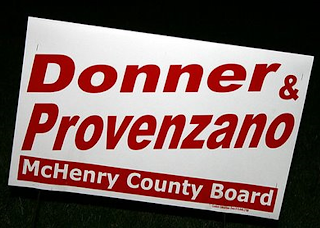 Provenzano spent next to nothing in his fall campaign last year, although he put up previously purchased signs. It was not until the night before the election that I saw any evidence of a joint campaign between him and his successful GOP running mate Mary Donner.

That consisted of a joint sign put in front of polling places.

I think the lack of a joint campaign was a major reason for his loss.

The press release he sent out Saturday is below.

(And, I guess it’s time to remind candidates that I am happy to publish candidates’ press releases the same way the the Crystal Lake Herald and other local papers used to do. Just email them to me. The email address is at the bottom right of this page.)

It’s my honor and pleasure to announce my candidacy for McHenry County Board and invite you to join our campaign team as we move forward to victory in 2010.

During my six years on the County Board I had the distinct honor to serve with Ed Dvorak and before that I had the opportunity to fill Ed’s seat on the Nunda Township Board. It was bittersweet news to learn that Ed will be retiring from the McHenry County Board after the completion of his current term.

I am once again honored and humbled to receive Ed’s encouragement and support to run for his seat on the County Board. Ed has a long tenure of distinguished public service including Nunda Highway Commissioner, Nunda Trustee and most recently McHenry County Board. On behalf of the constituents of District 3 and all of McHenry County, I would like to be the first of many to salute Ed’s public service and send a heartfelt thank you for a job well done!

Please take a moment to read through our e-news for information on how together we can begin the journey to keep this important position in Republican hands.

Ed Dvorak and Barb Wheeler’s terms are expiring. Both Dvorak and Wheeler are listed as supporting him, as are the following:

In addition, the following Republican precinct committeemen are listed as supporters:

August 4 is the first day to pass petitions for the Republican and Democratic Party primary elections.

Dvorak also served as Lakewood Village trustee before moving to the north side of the Crystal Lake area.