The U.S. Attorney’s Office has issued the following press release about another alleged Ponzi scheme in Chicagoland:

FRANK A. CASTALDI CHARGED WITH ALLEGEDLY SWINDLING MORE THAN 450 INVESTORS IN $77 MILLION PONZI-SCHEME

CHICAGO – A suburban businessman who offered and sold purported investments to hundreds of investors was charged in an information filed yesterday by the United States Attorney’s Office with allegedly operating a more than 20-year Ponzi scheme that resulted in more than 300 investors sustaining losses totaling over $31.5 million. 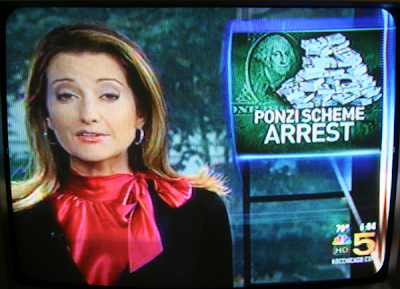 The information alleges that, over the years, Frank A. Castaldi fraudulently induced more than 450 investors to invest over $77 million in purported 6-month promissory notes, which Castaldi falsely represented would pay guaranteed returns of 10% to 15%.

Castaldi was charged with two counts of mail fraud and one count of corruptly endeavoring to impede the Internal Revenue Service in an information that was announced today by Patrick J. Fitzgerald, United States Attorney for the Northern District of Illinois, Robert D. Grant, Special Agent-in-Charge of the Chicago Office of the Federal Bureau of Investigation, and Alvin Patton, Special Agent-in-Charge of the Chicago Field Office of the Internal Revenue Service-Criminal Investigation. In addition to the mail fraud and IRS-related counts, the information seeks forfeiture of approximately $31.6 million.

Castaldi, 56, of Prospect Heights, was initially charged with a single count of mail fraud in a criminal complaint filed in U.S. District Court in Chicago on January 23, 2009.

According to the information, between at least March 1986 and December 2008, Castaldi engaged in and operated a “Ponzi” scheme by continually raising funds through the offer and sale of promissory notes to make purported “interest” payments to earlier investors. During the scheme, Castaldi made false representations and promises regarding the risk involved in the investment, the manner in which investors’ funds would be used, and the source of returns generated by the investments, it alleges.

Castaldi allegedly fraudulently induced prospective investors to purchase promissory notes, and investors to roll over promissory notes, by falsely representing the risks involved in the investment and the source of the promised 10% to 15% returns. Castaldi also allegedly personally guaranteed the safety of the investors’ principal, when he knew that he did not have the ability to make good on such guarantees without operating his Ponzi scheme.

The information further alleges that Castaldi falsely represented to certain prospective investors and investors that their funds would be invested in several different ways, including:

In reality, the information alleges:

The information also alleges that Castaldi used a significant portion of investors’ funds to make Ponzi-type payments to earlier investors as part of his scheme.

The information further alleges that, during the operation of his Ponzi scheme, Castaldi corruptly endeavored to impede the IRS in the due administration of the Internal Revenue Code and the ascertainment and collection of income tax revenue by, among other things, failing to report to the IRS his receipt and use of investors’ funds.

If convicted, each mail fraud carries a maximum penalty of 20 years in prison and a $250,000 fine, or the Court may impose an alternative maximum fine totaling twice the loss or twice the gain, whichever is greater.

The charge that Castaldi corruptly endeavored to impede the IRS carries a maximum penalty of 3 years in prison and a $250,000 fine. The Court, however, would determine the appropriate sentence to be imposed under the advisory United States Sentencing Guidelines.

The government is being represented by Assistant United States Attorneys Christopher Veatch and Sunil Harjani.

The public is reminded that an information contains only charges and is not evidence of guilt. The defendant is presumed innocent and is entitled to a fair trial at which the government has the burden of proving guilt beyond a reasonable doubt.

Companies mentioned in the indictment are