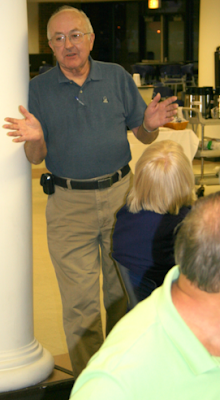 Another 170 or so await a report from the U.S. Department of Education to see if they are eligible for Free Application for Federal Student Aid. This FAFSA process takes 3-4 weeks, so high school grads who haven’t started the process yet probably won’t get an answer in time for classes to start.

“What a nice problem to have,” Ally said.

Telling me that college enrollment was up 55%, MCC Board President George Lowe observed,

“That’s a hell of an increase!”

A woman asked if the extra students wouldn’t cost more money, perhaps, she suggested, more than the resulting extra tuition.

Ally made two responses that I caught:

Part-time teachers are a LOT cheaper that the full-timers.

Suggestions from the tables that I jotted down included “hybrid classes.” That was defined as half in the classroom, half online.

I think it was the same table that said this about state financial assistance:

“We were hopeful that state funding might increase…but not too hopeful.”

It’s good to have a sense of humor. 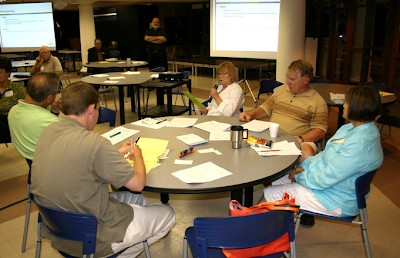 Taking photos while taking notes makes it difficult to link the two. The table with the sense of humor is either above (the last one to report) or below: 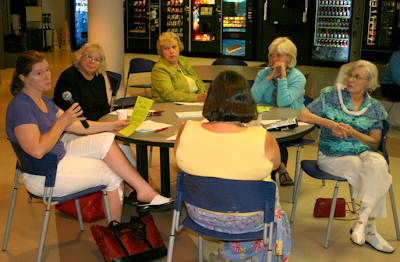 Lowe took the floor at the end of the meeting and pointed out that state financial assistance had gone down from 23% to 7.9% over the last sixteen years.

That 23% was less than what the committee that led the 1967 junior college referendum effort presented to taxpayers.

The state told the organizers that it would provide one-third.

With a ten-cent referendum rate request, the committee told voters that 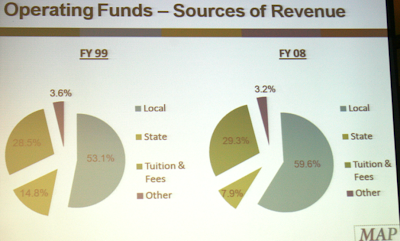 Note, however from the pie chart that while the taxpayers now pay 59.6%, almost twice what voters were told their share would be, students do not pay the 33% that was presented in 1967.