Crystal Lake resident Janness Abraham sent me this email. It was so good, I asked if I could share it more broadly on McHenry County Blog. She agreed and here it is:

Friday, I humbly attended the homecoming of the National Guard, in Woodstock, IL.

When I saw those young faces of the men coming home, and the faces of those who did not I am almost at a loss for words.

I saw a dad meeting his baby boy for the first time.

I saw a tearful WWII Army vet, whom I thanked for his service, and talked to after the ceremony, and realized he was about the age my dad would be were he still here.

Was he crying, at what this nation has become? I’m glad my dad isn’t here to see what’s happened to his country, how he fought in Europe for 5 years for our freedoms. 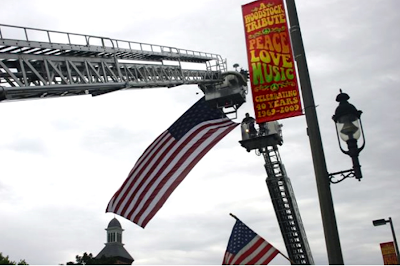 I realized yesterday, more than ever before, that we must do everything and all we can, before America no longer is free. Please note the pics and a few comments. (Especially the first photo, click to enlarge and photo.)

I didn’t see the Woodstock flag on the light pole until I downloaded my photos.

I was standing next to a woman who was crying, she said, “This is better than when the troops came home after Viet Nam.”

I told her that I felt the same way, and that is why I was there, because I swore I’d never let that happen again, if it were in my power.

Back in 1969, some friends of mine protested the war — right there, on the Woodstock Square.

I was at the military hospitals visiting my friends who did not come back in one piece. So strange to look at that flag, “Woodstock celebrates peace, love, music.”

I was glad that I could be there to welcome these brave young men who continue to fight for our freedoms. 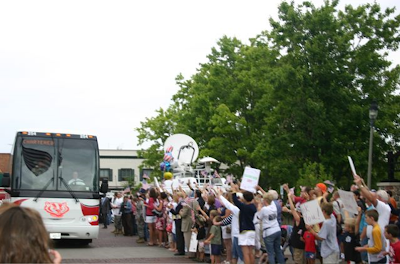 The troops on the bus, with a cheering crowd. 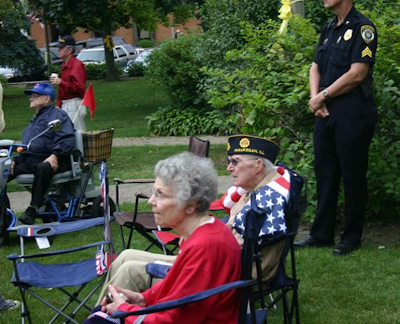 The army WWII veteran I talked to. 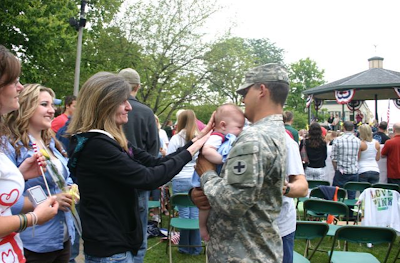 I believe this is the young soldier’s mother, and grandmother of his son he just met for the first time. The mother of the baby is behind the grandmother. 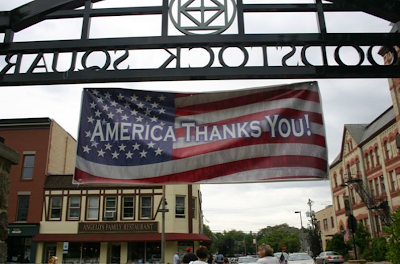 Yes, we do thank you! Each and every one of you! 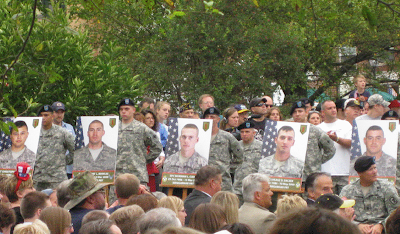 Sadly, those who did not come home and paid the ultimate sacrifice.

= = = = =
In the front row I see McHenry County State’s Attorney Lou Bianchi, State Rep. Jack Franks and McHenry County Sheriff Keith Nygren. This is the first photo I have seen five soldiers’ posters. If you know the name and details of the fifth, please share it in the comment section or email me and I’ll add it.

Here are some more from another friend of McHenry County Blog.