A Huntley School Board packet was finally posted online and I am told we have board member Aileen Seedorf’s prodding this morning to thank for this. 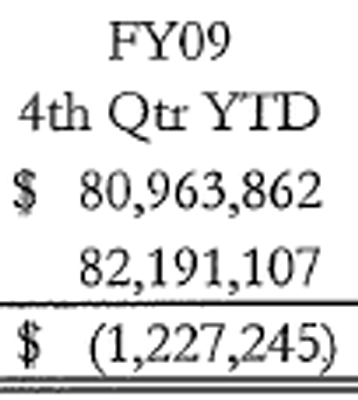 There was plenty in the board packet that Superintendent John Burkey didn’t want reporters and Special Ed parents to see.

Perhaps most important is that the school district ran a deficit of more than $1.2 million last year.

Secondly, if you think deficits are bad, here’s what the new top financial person, Mark Altmayer wrote about end of fiscal year “deficits” (click to enlarge):

“Moreover, a deficit does not indicate that the District does not have cash reserves, rather, it is an indication of the cyclical nature of Public Education, and, as such,

is to be expected.”

I thought CPA’s hired from the private sector didn’t like deficits. Corporations have to run surpluses to expand…or even stay in business over the long run.

End of fiscal year deficits are to be expected?

It’s not too hard to miss once it’s posted as it’s on page 1 of a 2 page report.

You might be bold enough (and have enough common sense) to think spending more than you take in causes a deficit.

“a deficit … is to be expected”

I wonder if the Altmayer employed at the Geneva school district is related.

If the town hall meeting a couple of weeks ago is any indication, Huntley administrators act offended when residents question their judgment.

What a surprise when they boldly write

“deficit … is to be expected”

for year end results. Does he expect that the school board won’t care?

Deficits can happen when you can’t pay your bond and interest expense because you are spending too much on teachers’ salaries and benefits, for example.

One expensive solution would be to refinance and reschedule bond repayments, increasing interest expense for taxpayers in future years when current school board members and administrators may be long gone.

Do I hear echoes of escapades Springfield?

In other words, make balancing the budget in future years someone else’s job.

That’s what has been floated and presented to the board.