As of 9:30 this morning–the day of the board meeting–Huntley School District 158’s board packet information is not online.

One could guess that Superintendent John Burkey doesn’t want to disclose information ahead of time to Special Ed parents interested in how the Federal IDEA Special Ed money will be spent, but that would just be a guess.

If that is the major decision to be made tonight, the Special Ed parents aren’t going to be allowed to read the information ahead of time to decide if they should plan on attending the meeting.

This is certainly a step back toward opaqueness from a road of transparency that even included releasing union contract details during negotiations–something that may have occurred nowhere else in Illinois and I’d give odds won’t happen again in District 158. 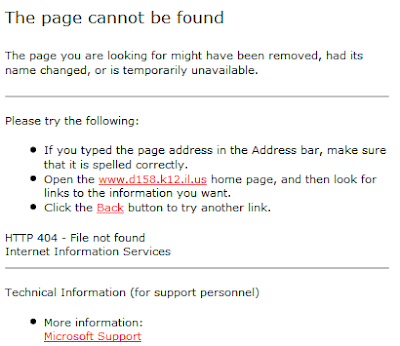 This is probably not quite on point, but one could easily note that President Barack Obama is not exactly releasing the details of proposed health care legislation, but was telling Congress to hurry up and vote for it.

Residents are deprived of the right to publicly comment before any board decision is made when, as a practical matter, they are prevented from reading inches of board papers until only hours before the meeting.

“The page cannot be found”

= = = = =
Miracle of miracles, the link now works!
= = = = =
You can have a new top financial person in Huntley, but posting financial information ahead of time so people can read it must not be in his concept of “disclosure.”