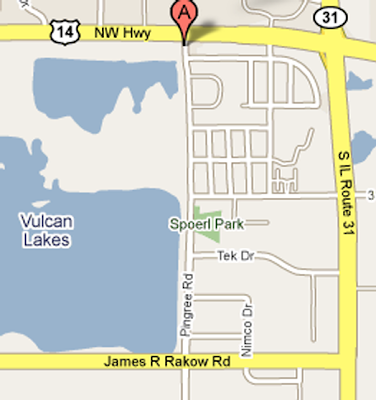 The big one is larger than Crystal Lake…by a lot.

Everyone knows that waterfront views add value to real estate.

The hot neighborhood rumor a couple of years ago was that the last lot had been purchased for $450,000.

Instead of approving a highrise where those living on the upper floors could see Vulcan Lakes over the evergreens, the old outdoor movie theater site ended up as townhouses that could have gone pretty much anywhere.

While it’s also across Pingree Road from Vulcan Lakes, there is a lot of land south of Three Oaks Roads which was zoned for industrial buildings. I guess that was in the 1980’s.

Why city planners did not find a way to maximize the value of the land fronting on Pingree is beyond me. Industrial buildings are not the highest and best use of this land.

For more than a year, I’ve noticed an empty factory building at the intersection of Pingree and Tek Drive. It’s on the northeast corner.

I picture a restaurant overlooking Vulcan Lake on a second or third floor location.

Is that too imaginative an adaptive re-use?