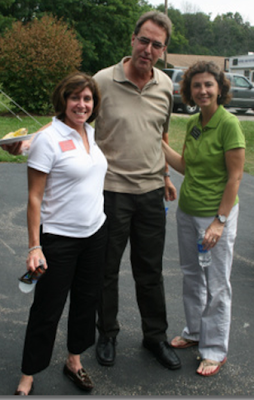 So I can understand how Appellate Court Justice Mary Seminara Schostok felt after she got a Friday call from McHenry County Republican Party Chairman Mike Tryon.

He was inquiring why her name and the title of “Judge” had appeared here on McHenry County Blog. I took the information about a $2,500 contribution directly from on State Rep. Jack Franks’ campaign disclosure forms at the State Board of Elections.

We discussed the matter at Saturday’s Nunda Township Republican Picnic.

Here’s what I took off the State Board of Elections web site:

It turns out that Justice, no longer merely a circuit court judge, but now appointed 2nd Appellate Court Justice Schostok has different politics from her husband Michael.

He’s a trial lawyer and a friend of Herb Franks, one of 43 people who went fishing in Canada in June. It’s a bipartisan group, I’m told.

The contribution was made on June 29th–right after the group returned home, I would guess.

Earlier in her political career, Schostok had taken heat when her husband had made a contribution with their joint checking account.

She persuaded him to open a separate account for his political contributions.

I suggested that once a contributor’s name is entered into the Illinois State Board of Elections’ system by a candidate that the next time a contribution is entered from the same name, the same information is probably entered by the campaign record keepers.

Come to find out, a $500 contribution was made on July 12, 2007, and the occupation listed wasn’t “attorney” to reflect Michael’s profession, but “Judge, State of Illinois” to reflect his wife’s.

No way to know why.

Justice Schostok told me the Franks’ campaign has been asked to remove her name and position from state campaign records.