How many thousands of people in Illinois could receive low cost catastrophe health care for $13 million?

If the Obama administration is looking to save money, they might look at the money giveaway going on within their own administration.

What struck me is this press release from Governor Pat Quinn’s office:

CHICAGO – Governor Pat Quinn today announced $13.1 million in Safe Routes to School grants to schools and communities across the state. This 100 percent federally funded program is designed to enable and encourage children to walk and bike to school.

When you see what current spending priorities are, does it give you confidence in how our government run our health care system?

The press release does make this interesting observation:

“With Illinois ranked fourth in the nation for childhood obesity rates, providing children with a safe and secure means of walking to school is an important tool to improve the health of our children.”

Locally, we have 100 percent of Huntley District 158’s students eligible for free transportation.

This is true even for the subdivisions like Covington Lakes, which is literally a stone’s throw from the schools off of Reed Road. You can see buses travelling through that subdivision when school starts. That’s where Superintendent John Burkey’s family lives. 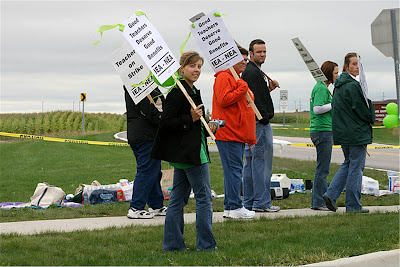 Academic Drive through the corn field is also in need of about $900,000 of repair. It wasn’t built as a permanent road, just for emergency access, but it has become a major access route.

It is a “shovel ready” project with the engineering already done.

Did Huntley administrators already apply for this grant money? Academic Drive not only needs repair, but probably would qualify for sidewalk money, too, since it doesn’t have one.

If school district administrators did’t apply for this grant money, Huntley taxpayers will likely end up picking up the final road repair cost.

Another snippet from the Governor’s press release:

Is your McHenry County school district one of those that applied?

Superintendent Burkey has opposed hiring a part time (but experienced) grant writer saying it was not necessary, that his staff was more than capable of doing the job.

Let’s see how much money Huntley gets from funded federal grant tailor made for Huntley.

And when the free text book program began in Illinois, District 47 was johnny-on-the-spot after I alerted it. It got money during the pilot stage of the program, which was aimed at subdizing private schools.

= = = = =
Teachers were not allowed to picket on school property. Here you see them picketing at the entrance to Academic Drive.