Adam Andrzejewski, candidate for the Republican nomination for governor. Andrzejewski prospered in the private sector. His web site touts “Adam for Illinois.”

Bob Schillerstrom, candidate for the Republican nomination for governor. His web site touts “Bob for Illinois.” It emphasizes his opposition to the video poker (read “slot machine”) law supported by oh-so-many Republican legislators, but not their constituents. It does not emphasize his role in breaking suburban unity with regard to the Regional Transportation Authority resulting in tripling the RTA sales tax.

Bill Brady, candidate for the Republican nomination for governor. His web site uses his last name.

Robert Zadek is running for the Republican nomination for the United States Senate. Here is the Rockford resident’s web site. 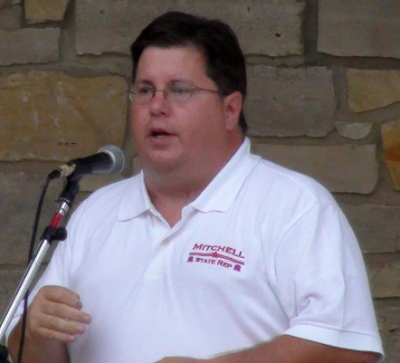 Paul Mitchell is a candidate for the Republican nomination for state representative who is running against incumbent 62nd District Sandy Cole in Lake County. His web site is headlined, “Pro Life, Pro Liberty, Pro Happiness.”

It was a hot day, as can been seen by looking at the candidates. 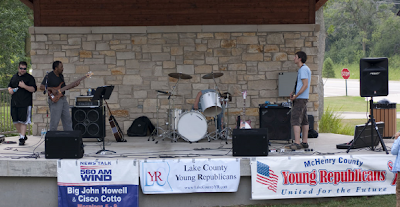 The band Clone Radio is playing above. Also appearing was Bros & Joes’ band.

You can see the banners for the Lake and McHenry County Young Republicans in this shot of the stage.