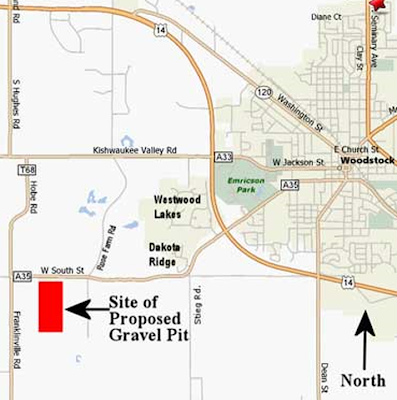 Thanks to Gus Philpott’s “Woodstock Advocate” for pointing me to the Seneca Township web site NoForPit opposing the Merryman gravel pit zoning.

The opponents have this update from Judge Maureen McIntyre’s courtroom:

Illinois Judge Maureen McIntyre ruled on August 19th. 2009. that the decision of the McHenry County Board on July 24th 2007, DENYING the Merryman Aggregate’s Gravel Pit permit was justified.

Therefore the decision to DENY application to Merryman for Conditional Use Permit for Gravel Mining is affirmed and the case is dismissed.

Judge McIntyre made this decision after considering the record and arguments presented, she found the decision of the McHenry County Board is NOT against the manifest weight of the evidence.

IT IS THEREFORE ORDERED that the decision of the McHenry County Board on July 24th 2007, DENYING the application for Conditional Use Permit is affirmed and the case is dismissed.

This Gravel mining operation was to be located on the property at 15613 South St., about a mile west of Woodstock city limits.

The following are NOT in support of the Gravel Pit: