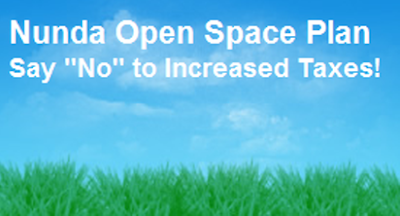 Tax fighters Gerry Walsh and Doug Mann have launched a campaign to gather enough signatures to call a township meeting to consider calling a referendum to repeal the Nunda Township Open Space Plan.

Walsh’s opposition to tax hikes goes back to at least 1991, when he and I and a roomful of others attended a Crystal Lake Park Board meeting in the Nature Center to oppose the park district’s maxing out on non-referendum bonds in the window of opportunity between when the Property Tax Cap was passed and January 1, 1992, when it took effect. He headed National Taxpayers United of McHenry County, then.

(Boy do we need something like that now. Tax districts like Huntley School District 158 is shifting expenditures from Tax Capped line items to non-Tax Capped line items, just to point out one example of where taxpayers will see surprise tax hikes without a referendum’s having been passed. No one has yet raised a fuss, as far as I can determine.

(A recent letter from a Cary woman was searching for the group CANT, which stands for Citizens Against Needless Taxation, whom she thought was associated with me. Back in the early 1990’s, there was a group called TARGET, which stood for Taxpayers Against Ridiculous Growth and Excessive Taxation. That group printed and passed out leaflets about the park board meeting I mentioned above. Dave Bryan headed it up.)

I’ll post it here, too, so more than the 11 people who had accessed the web site when I copied it will see it.

In April of 2007, the voters of Nunda Township approved the Open Space plan.

Those of us who are against higher taxes think the voters should have the option to repeal the Open Space Plan, and are asking your support in doing so.

1. Why should we repeal the Nunda Open Space plan?

Open Space is good. Tax increases are bad. People who want open space can buy a house on a larger lot. That way, they can invest in their own personal open space.

3. Why do they want a tax increase for Open Space?

In the October 2006 Nunda Open Space Report, the committee’s concern was about hydric soil (“wetland” is the generic term) which must be conserved for ground water quality. However, the report does not say that ground water quality is currently a problem, nor is it expected to be a problem. We reviewed the water quality reports from Crystal Lake , Island Lake , McHenry (county and city), and Woodstock . No EPA violations were reported.

Since the ground water aquifer in this area flows from west to east, the way to protect water quality in Nunda is to acquire the cheaper land in the west for open space. This is exactly what the McHenry County Conservation District is presently undertaking with our tax dollars. Even if the ground water aquifer was a problem, acquiring open space in Nunda helps the citizens to the east in Lake County, not those of us residing in Nunda Township.

Traffic congestion was not addressed in the Nunda Township Open Space report. Many of us living in the unincorporated area have lot sizes of one-half an acre or more. We bought our own open space.

The tax increase, however, will be immediate.

5. Do we have Open Space in Nunda Township ?

If you have questions or want to get involved in helping keep your taxes from increasing, contact either:

I asked Walsh how many signatures were required and he told me the number was 15.

Looks as if there will be a referendum on the ballot in Nunda Township next year, if those attending the township meeting vote for it. The meeting should be a good show with both proponents of the tax hike and opponents trying to marshal attendance.