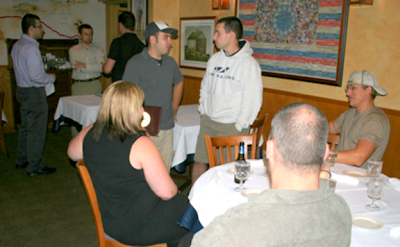 The patriotic decor of Crystal Lake’s 1776 restaurant was an ideal setting for Wednesday night’s meeting of the McHenry County Young Republicans.

It was so much more appropriate that the little room in the Pizza Hut basement outside the men’s and women’s restrooms where I remember the YR’s once met back in the 1970’s.

The main speaker was U.S. Senate candidate Ed Varga, a resident of Richmond and a ten-year member of the McHenry County Board of Health.

Varga was upbeat, having just been invited yesterday to give a five minute talk in Springfield to the Illinois Republican County Chairman’s Association at 10 today.

He previewed the speech on the YR’s.

Varga described himself as a 42 year old engineer who was a single parent of an 11-year old son who had lost his health insurance last year. His father emigrated from Europe.

He described his greatest achievement in his pubic service as

“learning how to listen.” 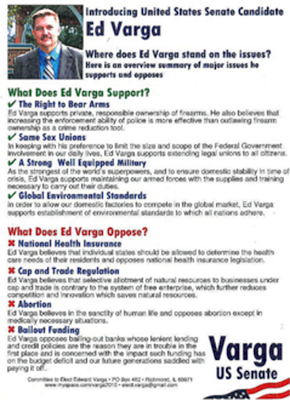 “Our leaders in Washington, D.C., have forgotten how to listen,” he continued.

“People are speaking, but people in in Washington aren’t listening.”

From his hand out, I see Varga is [Mistake originally published follows: “also opposed to.” Correction has been inserted following this parenthesis.] in favor of same sex unions. (Click to enlarge the image.)

After Varga’s short speech, YR President Bryan Javor announced the group now has 726 members and the goal of activating 10% of that number.

One of the on-going projects is to notify Young Republicans who live in a precinct which now had no elected GOP precinct committeeman and encourage them to run for the office.

Javor then called on heads of committees for reports.