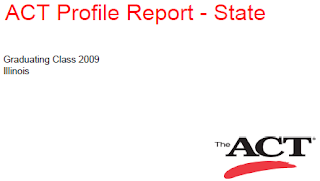 The vast majority of school districts don’t practice transparency and put the full report for each high school on their web site.

There’s good reason why. There’s info the school boards and superintendents would rather not want you to see.

The table below is from ACT organization web site. The link for 2009 scores for Illinois is:

So how did your student in McHenry County compare to the below State averages?

If your student was taking courses to prepare them for college then column “Average ACT Core or More” is the comparison column you may want to look at.

It might not surprise anyone that Supt. John Burkey in Huntley School District 158 might want to not disclose Huntley High’s test results to the board and public and let residents compare the District’s scores to the Average ACT “Core or More” averages.

Instead, you can expect superintendents like Burkey to promote an apples to pears comparison, such as had been done in the past.

The pears are the state’s much higher percentage of diverse students who aren’t taking courses with material that prepares them for college.

Suburban districts also don’t want to highlight how they might be underserving their Hispanic or African-American students.

Table 2.4. Average ACT Composite Scores for Race/Ethnicity by Level of Preparation follows (click to enlarge either the re-typed version or the original, which you can see comes out a bit smaller).

At least readers of McHenryCountyBlog.com have the link and summary numbers to do a comparison.

You can see how far away this average is from the averages above that aren’t for the easier high school courses.

The scores for Huntley School District 158, for instance, were handed out Thursday night.

How did this district do for the majority of their Caucasians students taking Core or More classes? 23.4

That’s a half a point below the State average of 23.9.

How did Hispanic kids do taking the same course? 22.6, which compares well with the 19.6 State average for the same group.

African Americans in Huntley brought up the average for these courses with an ACT score of 24.0, compared with 17.9 for the State average for this group.

The above chart probably explains why suburban newspapers only report the composite averages for all students. It makes performance look good compared to state averages when all the State overall average does is hide how sizable the achievement gaps are in Illinois.

If a guidance counselor at school tells your student he or she can get into an elite university with an ACT score of 23, for example, at least you can see if 23 is below the entire State average for your student, or not.

You can find the press release that District 300 provided here.