A fight has been between Republicans who want to borrow about $5 million to build and finance a new Grafton Township Hall on Haligus Road in Lake in the Hills and those who don’t. 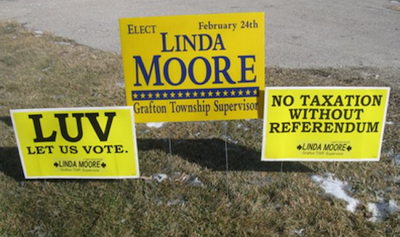 Moore won the Republican primary by 30 votes, using the argument that taxpayers should be allowed to vote on whether to put themselves in debt for a new township building.

In July, after pretty much all the fireworks were over, the Northwest Herald editorialized against a new town hall. (Lots of links to what happened during the fight–the township meeting with its tie vote, the court case, etc.–in the link in the preceding sentence.)

“Shall Grafton Township borrow in excess of Three Millions ($3,000,000.00) dollars to build a township hall and issue bonds for the building?”

The cost is probably $3.5 million to construct the building, plus another $1.5 million or so for financing, but you and voters will get the idea. 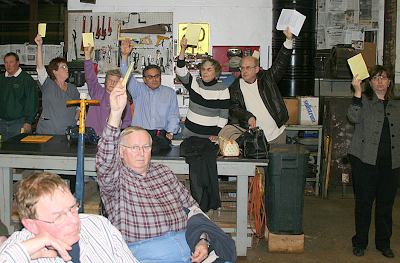 The referendum will be on the ballot November 2, 2010.

Assuming that township building proponents (all the township board, except Moore) are willing to wait for the results of the citizen vote and abide by those results, healing can begin within the Republican Party and citizenry in Grafton Township.

Those who passed the petition can be seen above. From left to right, they are Frank Kearns, Dan Ziller, Jr., Tom Halat, Tammy Lueth and Rick Lueth

= = = = =
The top photo is of Grafton Township Supervisor candidate Linda Moore at the Huntley Home and Business Expo.

The bottom photo shows the Grafton Township Trustees voting at the annual township meeting to approve the construction of a new township hall.