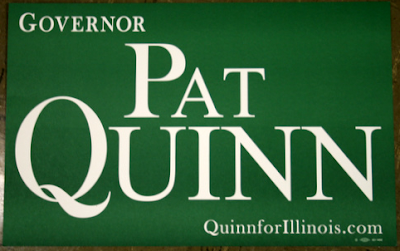 This yard sign for Pat Quinn is fresh from Governor’s Day at the Illinois State Fair in Springfield.

I found it at the Farm Bureau tonight where the McHenry County Democratic Central Committee was meeting.

State Rep. Lou Lang (D-Skokie) was the main attraction. Only a couple of times did I wish I could give a rebuttal. One was when he was talking about property taxes. Being a Cook County Democrat, he naturally did not point out how McHenry County homeowners are assessed at about twice the percentage of their homes’ market value as are homeowners in Chicago. Chicagoans are assessed about 1% of their homes’ worth, while we in McHenry County are assessed about 2%. Since Chicago tax rates are not twice as high as those out here, it means Chicago homeowners pay lower taxes on the same valued home than we do. 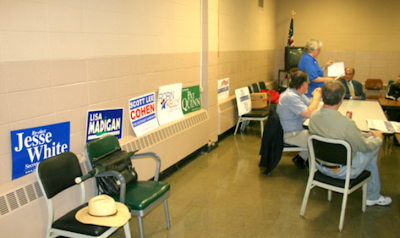 McHenry County Democratic Party Chair Cathy Bergan Schmidt had gathered as many signs as she could when she went down to Springfield for the event, Quinn’s included. She stressed that display of the signs did not indicate an endorsement and that, indeed, the McHenry County Democratic Central Committee does not endorse candidates in primary elections.