Lang is a 22-year member of the Illinois House and Mike Madigan’s floor leader.

“I’m involved in a lot of noise on the floor,” he said.

“We just got through five years of a governor who didn’t understand his job. I’m not just talking the criminal charges.”

Lang talked about the impeachment trial, observing that there had been a lot of talk about it in the back rooms for a long time.

“One who did not talk about it quietly in the back rooms was your own State Rep. Jack Franks.

“I’d prefer to have taken him out (in an election). Impeaching a governor isn’t too good for your party.

“While it looked like fun, it was not fun.

“This is the most important time I’ve spent in the legislature.

“(We are in) unprecedented fiscal crisis in the state. All fifty states (are in the same condition).”

Referring to Quinn, Lang said, “He’s been practicing for this job for a very long time. He wakes up as Lieutenant Governor and went to sleep as Governor.”

Lang praised the courage of Quinn for proposing an income tax increase.

“It took a significant amount of political courage.”

“We must do something to maintain the level of services,” was the way Lang characterized Quinn’s motivation.

Lang told how the Federal government made it impossible to use most of the stimulus money to fill the $6-11 billion budget hole. Congress wrote into the law that Medicaid payment cycles had to be lowered from Illinois’ 90-days to 30-days.

“All that was left was the human service programs.”

He pointed out that when human service agencies faced a 50% cut in subsidies that “doesn’t equal 50% of the cost because of fixed costs.” 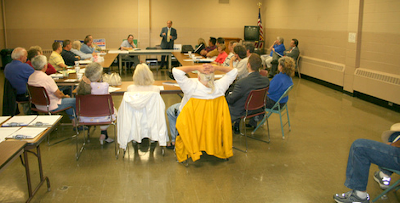 “I voted for the income tax.”

Lang was one of 42 Democrats who voted for it.

“Jack Franks, my very good friend, didn’t vote for it. He had legitimate, thoughtful reasons.”

“Dozens who voted, ‘No,’ did so just to protect their next election.

“Jack Franks is my good friend, but at least he had a reason.

“There are so many who did not.

“We did have thirteen more people (Democrats) ready to vote for an income tax increase,” Lang added.

Doing the addition, that meant the Democrats had 55 of the needed 60 votes to pass an income tax. Lang said that those 13 saw no reason to expose themselves to political challenge, if the bill were not going to pass.

The next day: “More About the Income Tax Fight.”

= = = = =
In the photograph of the three men during the question and answer session, you see, from left to right, Mark Freund, John Darger and Jonathan Farnick