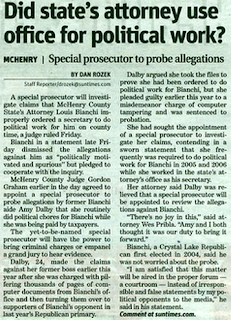 You know I try to share articles I find in Chicago newspapers.  It happens so rarely as to almost be an “event.”

The first in entitled,

Did state’s attorney use
office for political work?
What you see in Judge Gordon Graham’s decision to appoint a special prosecutor is a continuation of a multi-year fight between defense attorneys in McHenry County, who would prefer to have a state’s attorney more willing to settle criminal cases without a trail, and a state’s attorney who believes in letting the jury system make such decisions.  I’m not saying Graham is taking sides, just that the appointment of a special prosecutor was a goal of those who want a more agreeable state’s attorney, which would result if Bianchi is hounded out of office and could result if he doesn’t run for re-election in 2012.  Graham is running for a new circuit court judgeship in the Republican primary.
After Lou Bianchi beat the defense attorneys’ candidate in 2004, an almost frantic search was made to recruit an acceptable opponent in 2008.  Appellate Justice Sue Hutchinson was talked up, and, then, Asssistant Cook County State’s Attorney (Jim McAullif).  Both withdrew their names from consideration.
The final candidate was Dan Regna.  He lost a heated contest 57% to 43%.  Anything above 55% is generally considered a landslide.
But the fight didn’t end there.

In what seemed to be much like a tag team wrestling match McHenry County Democrats nominated Tom Cynor, outgoing central committee chairman, to run against Bianchi.  The Cynor campaign looked a lot like the Regna campaign.

Bianchi’s former secretary, Amy Dalby, brought charges that she had been forced to do political work while being paid by county taxpayers.  The evidence was taken from the state’s attorney’s office, along with official documents.  That lead to a special prosecutor’s indicting her for taking computer records from the state’s attorney’s office.
Graham’s Friday decision to appoint a special prosecutor to investigate Dalby’s charges brings us pretty much up to date. 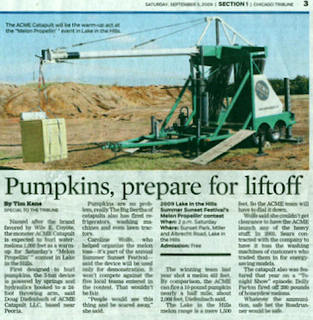 And, that’s brings me to the relationship I see between the pumpkin thrower imported from the Peoria area to attract people to the Lake in the Hills Summer Sunset Festival.

The Tribune page 3 article promoted the 2 o’clock appearance of “the monster ACME Catapult,” which can lob a pumpkin a half a mile.

That’s too long for the LITH course, so the machine will be “dialed down.

The naming of a special prosecutor is the equivalent of the disaffected defense attorneys having brought in the featured catapult.

It will, of course, cost Bianchi money.

It will also probably make the cancer survivor wonder why he is wants to be in public service.

That, of course, is the defense attorneys’ goal.

They want him out.

Only time will tell if the attack sullies Bianchi’s name more than the constant barrage of allegations in newspaper articles and the comments below them.
Today reporter Pete Gonigam’s “First Electric Newspaper” published a first rate summary of who hit whom when.   He also reported on a Young Republican connection when Dalby and Kristen Foley, Bianchi’s chief accuser, that I had not found.  Both were officers in the 2006 McHenry County Young Republicans.  Dalby was vice president of the YR’s and Foley was secretary.  Foley passed five of Dan Regna’s primary petitions.

Pieces of information are still missing.

“Who went to DeKalb to get the supposedly incriminating evidence from Dalby?”

I believe a Northwest Herald reporter has this information, but it has not yet appeared in the paper.  Maybe it will before the special prosecutor reveals his or her findings.