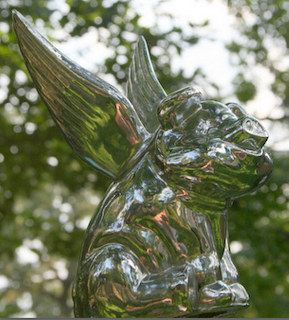 A friend dropped this flying pig on my front porch last week.

I haven’t seen him in a while, but I guess I told him the story about Illinois Senate President Pate Philip’s having said the state income tax would be raised “when pigs fly.”

That was before Governor Jim Thompson somehow convinced him to get enough Republicans to vote “Yes” to hike the income tax.

Today we have McHenry County Board Republicans deciding whether a pig will fly.

The pig in question is the Woodstock baseball stadium.

If ever there were a pig in a poke, this is it.

The board’s Finance Committee meets at 9:30 this morning.

The flying pig above seems to be a hood or motorcycle ornament.  I guess it would be a “flying hog,” if put on the right motorcycle.