It’s a pretty good gig, although nothing like as good as in DuPage County:

with $3,000 more for each committee chairman and a $1,000 bonus for vice chairmen.  (Undoubtedly, the DuPage County Board chairman uses the extra money to build the strength of his coalition.)

In McHenry County, the salary is approaching $20,000, plus full health insurance, if a member wants it.

The exact figure this year is $19,327.10.  And unlike DuPage County, the McHenry County Board members will see salary increases proportional to the increase in the Consumer Price Index.

Anyway, you can see why folks might want to run for the office. 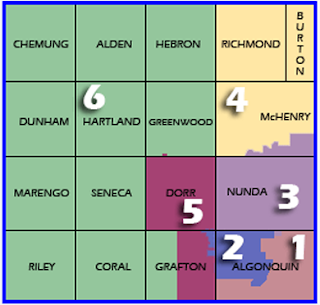 Now, I’m not saying that people don’t run because they want to “make a difference,” etc.  But I would observe that one can make more of a difference if one gains the power of public office.  And the money isn’t bad for a very part-time job.

The two incumbents are running for re-election.

They are Dan Ryan and Mary McCann.

Joining the fray are Mark Shepherd and Nick Carroccia.

Shepherd ran in 2006, coming in fourth of seven candidates.  That’s the election that

Schuster was elected to the board in 2008.

Shepherd is a Hebron village trustee and a Republican precinct committeeman.  I saw him at McHenry County State’s Attorney Lou Bianchi’s fund raiser.  Too bad I didn’t take a photo I could share with you.