Looks like the two daily newspaper political columnists in Chicago may be in for a feud. 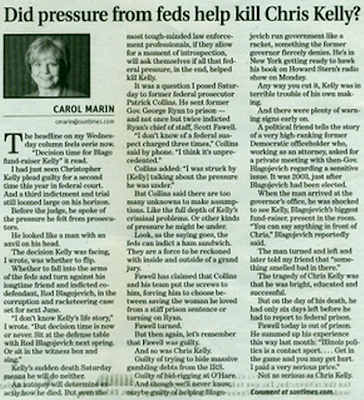 I looked at Sun-Times columnist Carol Marin’s Sunday column first.  You can tell from the title,

Did pressure from the feds help kill Chris Kelly?

I’m assuming the former Rod Blagojevich fund raiser killed himself, but I guess it’s possible that someone forced enough aspirin down his throat to kill him.

Then I read the Chicago Tribune column by John Kass.

And, having read Marin’s column first, the following leaped off the page:

“In the next few days, some mouthpiece, perhaps even a politician, will start spinning that if the feds hadn’t pressure him to talk, Kelly would be alive.”

Obviously, Kass had not read Marin’s column before he wrote his, so it wasn’t really aimed at Marin.

But the point was made.