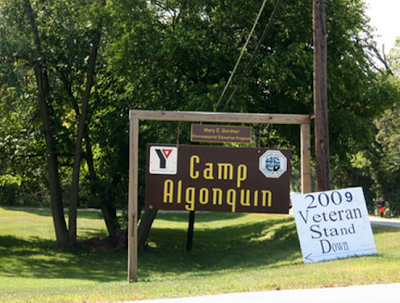 Today was the first day of NASA Education’s Veteran’s Stand Down in Camp Algonquin, located on the Algonquin-Cary Blacktop.  The second day is tomorrow. 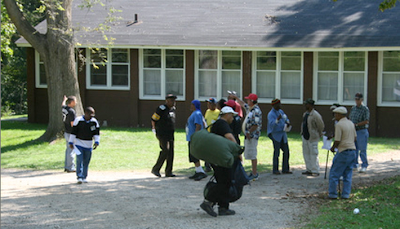 First veterans register at the building on top of the hill.  Then they wait around for a ride down the hill. 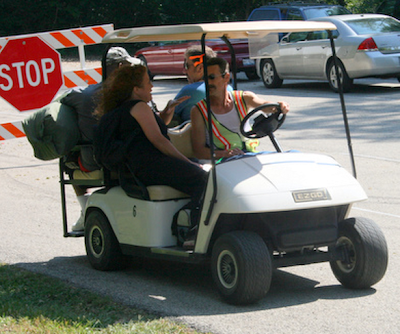 There are two types of rides.  A golf cart, which was delightful in the 80 degree weather. 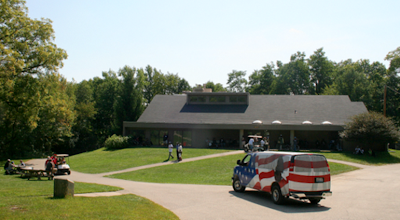 In the half of the building seen above were tables for those providing veterans with services.  When I walked in, NASA Education’s John Blanchard, a man with a passion for helping veterans whose white shirt you see in the foreground, was talking to Governor Pat Quinn’s Director of Veterans Affairs, Dan Grant, and others. 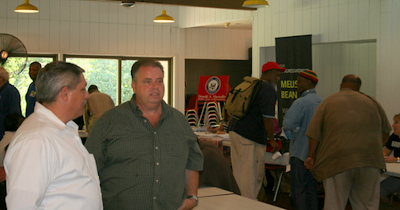 Lots of people wanted to talk to Blanchard.  This time I got a side view.  You can see the tables of Congresswoman Melissa Bean and Congressman Don Manzullo in the back corner of the room. 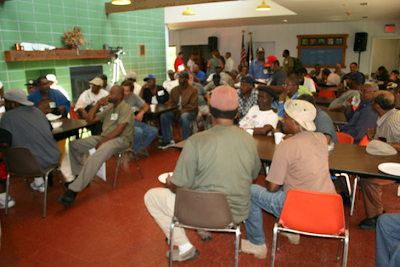 The veterans were mainly sitting around waiting for lunch. 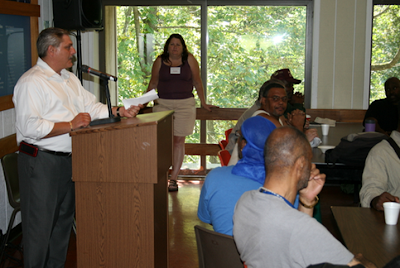 But, first came the speeches.  First up was Blanchard. 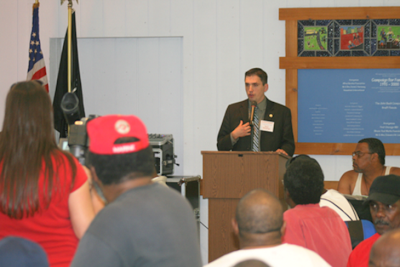 Next up was Veterans Affairs Director Dan Grant.  I was particularly impressed by this:
“Anyone who fights for the American Dream should have access to it.” 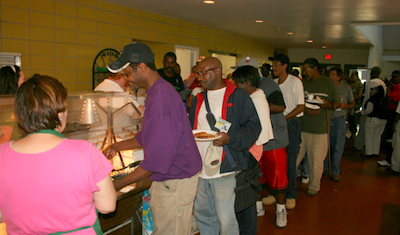 There were others from various veterans organizations, but the veterans were hungry.  It was after noon.  After a prayer, they lined up. 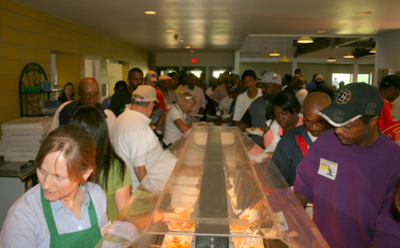 It was the longest line I have seen in the handful of Stand Downs I have attended at Camp Algonquin. 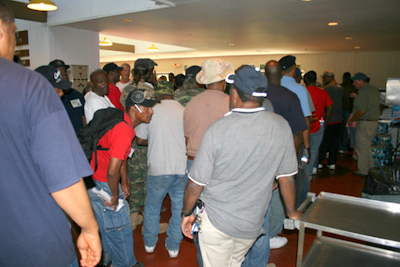 I’ve eaten something at previous Stand Downs, but by the time I left the building with the food, there was still a line of veterans. 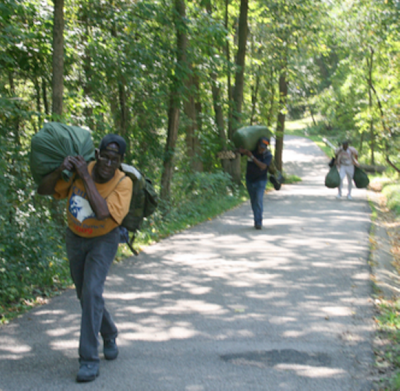 I headed farther downhill to the building with free clothing for the mainly homeless veterans.  While these energetic three were carrying their clothes up to the food building, others were waiting for the golf cart and van. 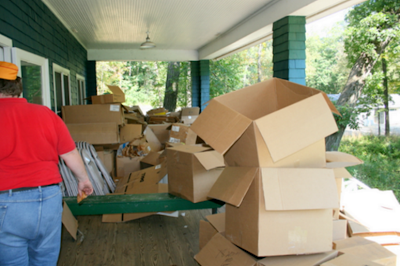 How many clothes were distributed by volunteers in the morning?  Take a look at all the empty boxes on the porch overlooking the Fox River. 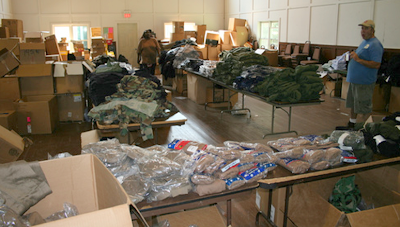 Here’s the room where the clothes were displayed. 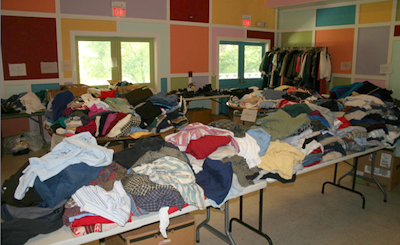 When I went looking for the place where haircuts had been provided in previous Stand Downs, I found a room full of women’s clothing instead. 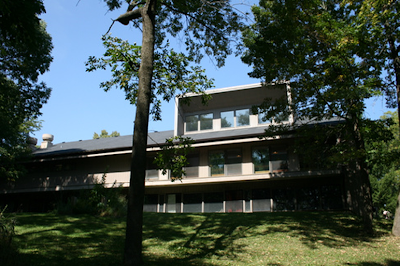 There I found Cortney Thurman and Melissa Adam giving haircuts to two vets.  They both work at Sport Clips in McHenry and were volunteering the services. 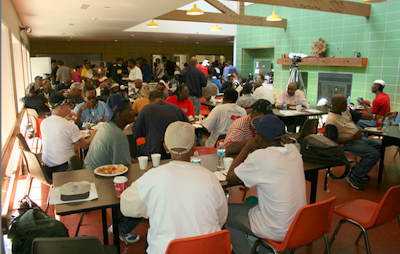 The dining room was still full. 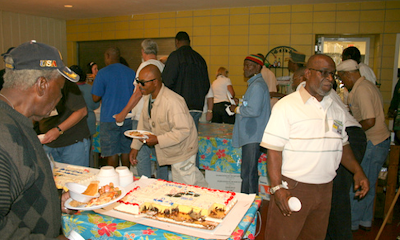 The pumpkin pie was pretty well gone, but there was still plenty of cake. 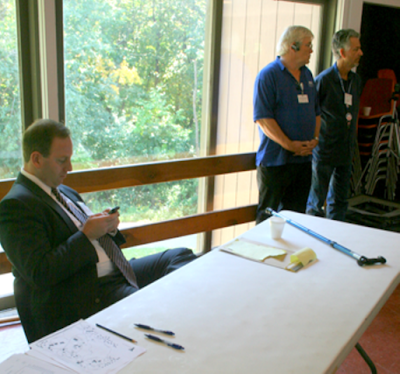 Among those offering advice was attorney Jeff Antonelli. Note his yellow legal pad has no pages left. He had been tearing off pages on which he wrote his phone number, but so many people asked for it that he started tearing pieces from the pages and handing them out. 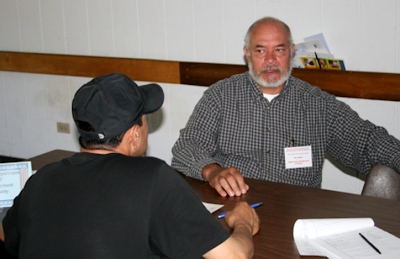 Ray Infante represented the Illinois Department of Employment Security.
In a downtime, McHenry County College employee Helen Jost of Lake in the Hills was caught talking to Elaine Slack, a volunteer from the Carpentersville VFW Post 15915.  The man leaning over from the Hospice of Northeastern Illinois is Richard Quick.  I didn’t see a table from Elgin Community College, the college that serves Algonquin and the rest of District 300.
The weather was so much better than when the Veterans Stand Down was held later in the fall.  Not too mention drier.