Ever wonder what it looks like when an attorney has his license revoked? 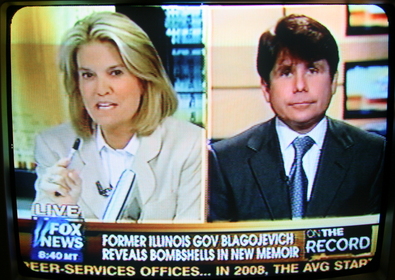 Below you see what the State of Wisconsin’s Supreme Court did to Nick Hurtgen, a Wisconsin Governor Tommy Thompson “wuderkind,” who ventured too far into Illinois politics, got indicted in the Edwards Hospital scandal and agreed to plead guilty.  Most of the people mentioned below will be witnesses in the Federal case against impeached Governor Rod Blagojevich.

The recommendation from Wisconsin’s Office of Lawyer Regulation (OLR) pretty well summarizes the Illinois Health Facilities Planning Board scandal.  It does not mention the Mercy Health Systems effort to place a hospital in Crystal Lake, but most of the players, sans Hurtgen, were the same as those involved in the Edwards Hospital shake-down described below.

STATE OF WISCONSIN:
IN SUPREME COURT

In the Matter of Disciplinary Proceedings Against P. Nicholas Hurtgen, Attorney at Law:

¶1   PER CURIAM.   Attorney P. Nicholas Hurtgen has filed a petition for consensual license revocation pursuant to SCR 22.19.[1]   He states he cannot successfully defend against pending charges of professional misconduct relating to his conviction, entered following a guilty plea, to one count of aiding and abetting wire fraud in violation of 18 U.S.C. §§ 1343, 1346, and 2 in connection with a long-running federal investigation of corruption in the administration of former Illinois Governor Rod Blagojevich.

¶2   Attorney Hurtgen was admitted to practice law in Wisconsin in 1992.  He resides in Illinois and is presently the subject of an OLR investigation into these matters.

¶3   The facts from the indictment are complicated and will be only briefly summarized by this court.  Attorney Hurtgen was a senior managing director in the Chicago office of Bear Stearns & Co. (“Bear Stearns”), an investment bank that did business with Edward Hospital.  In December 2007 Attorney Hurtgen was indicted in the U.S. District Court for the Northern District of Illinois on three counts of mail fraud, three counts of wire fraud and one count of extortion in connection with a “pay to play” scheme involving medical facility construction projects in Illinois.  Two other individuals, Stuart Levine, a member of the Illinois Planning Board, and Jacob Kiferbaum, owner and operator of Kiferbaum Construction, were also indicted in connection with the same scheme.  The indictment indicates that Attorney Hurtgen sought to arrange the financing of a proposed Plainfield hospital and medical center for Edward Hospital.

¶4   The indictment alleges that between early 2001 through at least June 2004, the three men conspired to defraud Chicago Medical School, the Planning Board, and the State of Illinois, among others, in connection with four construction projects.

¶5   According to the indictment, Levine, Kiferbaum, and Attorney Hurtgen agreed they would use Levine’s position on the Planning Board to try to force Edward Hospital to hire Kiferbaum’s company to build the proposed $90 million hospital and a $23 million medical office building in Plainfield.  The plan was to tell Edward Hospital representatives that the Planning Board would not approve the projects unless they hired Kiferbaum to build the projects.  Attorney Hurtgen assisted in the scheme because he wanted his employer, Bear Stearns, to receive the financing work for the new Edward Hospital.

¶8   As of the April 21, 2004, Planning Board meeting, Edward Hospital had not hired Kiferbaum.  Levine voted against the project and the Plainfield hospital application was denied.

¶9   Attorney Hurtgen eventually reached a plea agreement whereby he promised to cooperate with the investigation in return for a recommendation of a lighter sentence.  He entered a guilty plea on February 25, 2009.

¶10  Attorney Hurtgen is a Wisconsin-licensed attorney who engaged in felonious behavior by participating in a pay-to-play scheme.  Admittedly, Attorney Hurtgen was not acting as an attorney when he engaged in this scheme, but his participation in this scheme reflects serious misconduct that violates the public trust.   The OLR recommends revocation as the appropriate sanction, and Attorney Hurtgen does not oppose this recommendation.  He acknowledges he cannot successfully defend against the allegations of the pending disciplinary proceeding.  He states that he is freely, voluntarily, and knowingly filing the petition for consensual license revocation.  He notes that he is represented by counsel, and states that he knows he is giving up his right to contest the allegations of misconduct.

¶12  IT IS ORDERED that the license of P. Nicholas Hurtgen to practice law in Wisconsin is revoked, effective the date of this order.

¶13  IT IS FURTHER ORDERED that, to the extent he has not already done so, P. Nicholas Hurtgen shall comply with the provisions of SCR 22.26 concerning the duties of an attorney whose license to practice law has been revoked.

= = = = =
The photo shows Rod Blagojevich being questioned by Fox News’ Greta Van Susteren.  An attorney, Van Susteren suggested Blagojevich release all of the FBI wire taps of his conversations that he says he wants everyone to hear.  So far, Blagojevich has not done so.