Crystal Lake borrowed a little over $22 million at unheard of low rates last night to finance Vulcan Lakes and water and sewer projects and re-financing of 1998 bonds.

Utilizing Federal stimulus-subsidizes, the city will end up paying just 3.062% interest on $5 million on Recovery Zone Bonds authorized by the McHenry County Board. The bonds are General Obligation bonds backed by the 45% Federal tax credits on the interest and the city’s
Home Rule Sales Tax, unless the Vulcan Lakes Tax Increment Financing money can be used to offset it. 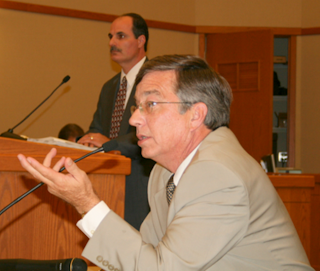 “It’s the first sale by a local unit of government in the State of Illinois,” financial adviser Phil McKenna told the council. (City Finance Director Mark Nannini, whose office’s work received an Award for Excellence from the Government Finance Officers Association, can be seen standing behind McKenna.)

“You become leaders in the market.”

With a new choice opened up by the Federal government under which 45% of the Recovery Bond interest will be sent to city hall every six months, “We just looked at the lowest interest cost,” he explained.

The bonds can now be taxable or tax-free, as municipal bonds traditionally have been.

In the refunding of $4.675 million  bonds, there were four bids.  A technique was used in which if bids were within 2/100 of a percent those interested were given two minutes to offer another bid.

“One firm bid six times; another 4 times and they got it,” McKenna said.

Even though there was “a favorable interest rate environment going in,” he continued, the city saved $772,000 in interest costs.

The final $12.435 million was borrowed under the Build America Bond program.   The net interest rate, after figuring in the 35% interest subsidy from the Federal government, was 3.089%.