Interested in bidding on about $30,000 worth of Ice Melt so Huntley School District 158 can keep its sidewalks passable this winter?

You can get the bid specs here.

Want to know how much the original bidders said it would cost the district?

The new bid specifications include something new.

They require that an “Intent to Provide Bid Form” be submitted to Doug Renkosik by fax and email. It’s at the bottom of the form below: 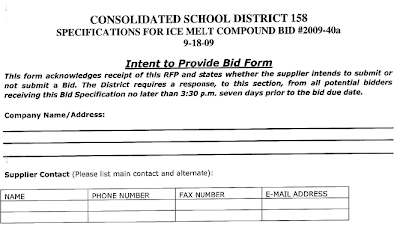 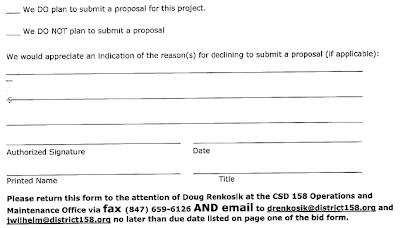 Haven’t seen such a form before.

It gets more interesting though.  While the fax has to be sent only to Renkosik, an emailed copy must be sent to both Renkosik and T. Wilhelm.

I would imagine it matters who bids.

In the first go-round, Grieve Construction was the low bidder.  It is believed that it is owned by a former Huntley School Board member. James Greve of Reed Road is listed as its president by the Illinois Secretary of State.

The administration recommended rejecting all bids on the grounds that multiple bidders had not filed references without pointing out that Tru Green had the contract last year and, in other such cases, references have not been required for the firm that held a bid the year before.

The school board agreed with the administration. 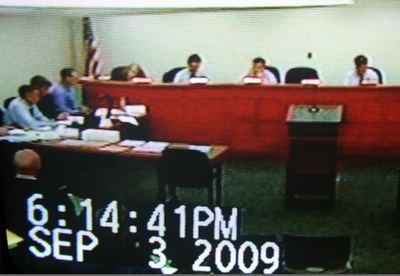 But the administration spent better than ten minutes refusing to agree to provide documents to board member Aileen Seedorf concerning the selection process at a Committee of the Whole meeting unless she gave administrators a written request.

What if someone filed a Freedom of Information request asking which bidders had filed this new “Intent to Provide Bid Form?”

I know from experience that District 158 can reply to such requests in a flash or drag it out for a couple of weeks.

What if one or more of the bidders found out who the competition was?

Wouldn’t that negate to some extent the benefits of a secret bidding process?

Perhaps it would be worth remembering that District 158 did not until recently even put its bid specifications on the internet.  Bidders had to call to get the bid specs.

So why has District 158 added a condition to the bid specs that wasn’t in the original bid?  Is it because Seedorf again insisted administrators put the bid specs online?

Maybe administrators may want extra time to check out new bidders.  In the past, District 158 required vendors to attend pre-bid meetings.  If you didn’t attend, you were disqualified.

Is this one of those one step forward, one step backward type of situations?

As Artie Johnson used to say on “Laugh-In,” 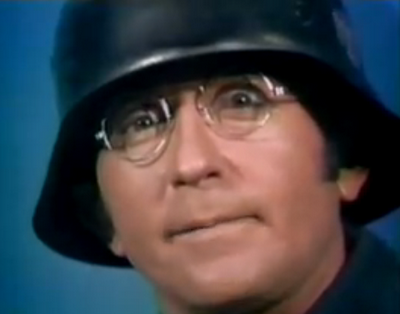