After the McHenry County Board’s Finance Committee meeting, Chairman Marc Munaretto answered some questions. One of them concerned how the allocation of Federal Stimulus Bonds for McHenry County was $27.5 million, but that there were about to be $33 million in requests.

Since the Woodstock baseball stadium request was for $15 million, that means the other potential request would be $18 million.  Unless multiple requests are in the pipeline.

I pointed out that manufacturing plants have a higher multiplier effect than retail. Or a baseball stadium. With the latter two, there is only so much money in a community to be spent on things and on recreation.

“We’re out beating the bushes right now (for other applicants),” Munaretto commented.

Commenting on the $33 million in potential bond requests versus the $27.5 million in authorization, Munaretto observed, “We don’t have to fulfill the request,” meaning, I took it, that the entire request for any project would not have to be approved by the county board.

Read this statement from the Erin Smith, Village President of Lakewood:

September 24, 2009
“Since there have recently been reports in the local media about potential development plans in the Village of Lakewood, I thought it would be appropriate and in the best interests of the residents of our community to provide accurate information regarding this development activity,” said President Erin Smith.
“We are currently working with a developer who is interested in building a mixed use project within the Village of Lakewood’s Planning Area, near the intersection of Illinois Route 47 and Illinois Route 176. 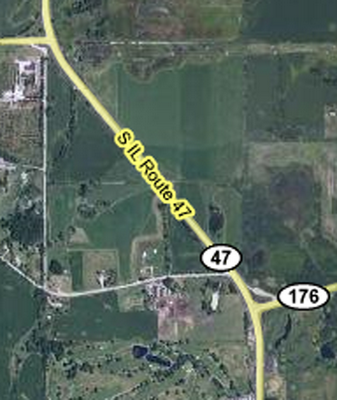 “This Planning Area is the result of signed Boundary Agreements with all of our neighboring communities,” she explained, “and has allowed for an orderly and purposeful attitude toward our planning and discussions with developers.”
This general area is designated for commercial development within the Village of Lakewood’s Comprehensive Plan and is an area of  “regional commercial significance” within McHenry County’s proposed 2030 Land Use Plan.
She further indicated that the first phase of the proposed development was a multi-use sports complex, including both indoor and outdoor facilities, with ancillary uses as a second phase.
President Smith explained that one of the most appealing aspects of the concept is the sustainable, green development strategy that the developer has outlined.
“We are both committed to the ideals of sustainable development,” said President Smith, “and believe that this concept provides the opportunity to create a strategic environmental plan that will incorporate best management practices and new technologies in all phases of the project and will solidify McHenry County’s reputation as a leader in environmental issues.”

President Smith also noted that this development has strong potential in terms of job creation and overall economic impact to McHenry County.

She finished by saying,

“All of our discussions until this time have been conceptual, and the more detailed analysis is just underway. Any further specifics regarding the project are purely speculative at this time.”

“We expect to have more details available regarding the project within the next few weeks and eagerly anticipate sharing them with the community.”

The property in question is north of Crystal Woods Golf Course and south of the west leg of Route 176 with some across Route 47 near the northern intersection. The part west of Route 47 is in Lakewood’s planning area, while that which is east is in Crystal Lake’s.
The developer has not been identified.
When asked for some more details, Smith told McHenry County Blog,

“The sports complex is Lakewood is targeted for youth.

“It is not targeting a minor league baseball team.

“It should be a nice complement to the proposed Woodstock stadium.”

The “media”  that broke the story was Gus Philpott’s Woodstock Advocate.  You remember, the blogger running for McHenry County Sheriff on the Green Party ticket.
He wrote two stories yesterday: