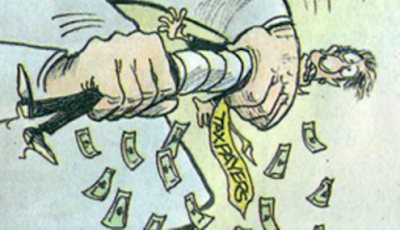 A couple of years ago, my Lakewood village board asked voters for permission to become a Home Rule municipality.

I got unsigned letters in my mailbox, signs sprouted up, the referendum went down to defeat.

A lot of the reason, I suspect is because the Lakewood village board bought the now-named Red Tail Golf Club with revenue bonds that did not work out as the bond guy said they would.  I wish I had been at the meeting when he advised that the revenue bonds be backed up by the full faith and credit of village property owners.

The result when golf course revenue did not provide enough for the bond payments was what amounted to a golf course tax of about $500 a year for the better part of a decade.

Now I see that Huntley has achieved Home Rule status the second way to obtain it–through growing to more than 25,000 population.

And, in the Elgin Courier-News, is an article quoting village Trustee Pam Fender on matters of revenue enhancement: 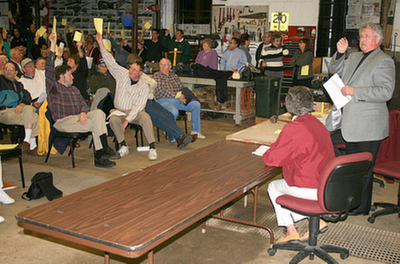 “Trustee Pam Fender, who recently attended a McHenry County Council of Government workshop on the topic, said there are several ways communities can use their home-rule authority to boost revenue. She cited ways of recouping money spent cleaning up foreclosed properties and the potential for video gaming fees as areas where the new powers could help the village’s bottom line.

The major advantage of a Home Rule unit is that village trustees can raise taxes without a referendum. That’s how the Crystal Lake City Council raised the city sales tax 75%.

Fender, by the way, was one of the most outspoken proponents of building the Grafton Township Hall without a referendum at the annual town meeting.  Click on the photo and you can see her standing next to the township trustees while the votes are being recounted.

The taxpayer cartoon was in the Chicago Tribune today.  It was drawn by Dana Summees and has a big guy with “LOCAL GOVERNMENTS” lettered across his tee shirt.