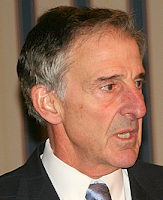 McHenry County State’s Attorney, Louis A. Bianchi, is pleased to announce that

The Honorable Judge Sharon Prather ruled today that David P. Hoffman, a defendant who was previously adjudicated a Sexually Dangerous Person, will remain in custody.

The State’s Attorney’s Office opposed Hoffman’s release, despite progress he has made in treatment, arguing that he remains a dangerous pedophile.

Hoffman, formerly of Woodstock, has been in state custody since 1980. He was declared a sexually dangerous person in connection with charges that he repeatedly abused two teenage boys in the late 1970’s.

While in custody, Hoffman admitted to a state psychiatrist that he molested at least 56 children, both boys and girls ranging from ages 2 to 16.

A psychiatrist called by the State as a witness testified that Hoffman, despite his long incarceration, still shows a sexual predisposition toward children.

In addition, prison authorities recently found magazine photographs of children in Hoffman’s cell, some hidden within the pages of a Bible.

This case was prosecuted by Assistant State’s Attorney Philip Hiscock and Ryan Blackney. By statute, those adjudicated as a sexually dangerous person are eligible for a hearing for release every twelve months.