Warning: Parameter 2 to wp_hide_post_Public::query_posts_join() expected to be a reference, value given in /srv/users/serverpilot/apps/wordpress/public/wp-includes/class-wp-hook.php on line 292
 Message of the day - Raised Hands - McHenry County Blog ↓
McHenry County Blog Home 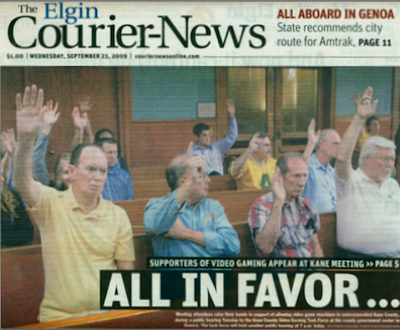 On October 7th, next Wednesday, the McHenry County License and Liquor Committee will hold a hearing starting at 6 PM.  It will be at the administrative center north of the county jail.

Input will be sought on whether the county should bar video gambling–electronic shot machines, if you want the truth–to be installed in places serving liquor in unincorporated areas.  Bars and restaurants.

No need to be on time. Politicians justifying having voted for this source of revenue to finance a state capital program–roads, schools, a $40 million new campus for the failing Chicago State University–will speak first.

Come late and you’ll still get a chance to speak.

There has been some effort to alert traditional opponents to gambling, as I mentioned yesterday, but not much.

And, if you oppose this matter and don’t attend, don’t be surprised to see something like the front page seen above from the Elgin Courier-News on the front page of one of the daily Heralds.