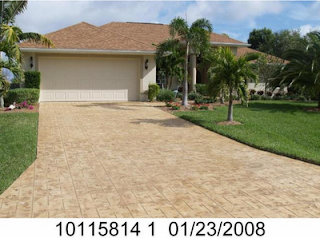 “This is one of those things that the Nygrens were caught in a situation that’s nobody’s fault,” McHenry County Supervisor of Assessments Donna Mayberry told me this morning, as I inquired about the family’s having Homestead Exemptions in both McHenry County and Lee County, Florida.

The little saga unfolded on McHenry County Blog over the weekend after the discover was reported on the blog written by 2008 Democratic Party Coroner’s candidate Dave Bachmann:

The existence of the Florida Homestead Exemption was reported on Friday, the Illinois State Board of Elections web site–reported voter registration of Marge Nygren on Saturday and the McHenry County Homestead Exemption on this year’s bill for the Hebron home on Sunday.

“We took it off,” Mayberry told me.

“They did not want the exemption here.”

Mayberry wrote a letter to the Lee County Appraiser on March 16th. You can see it below (click to enlarge): 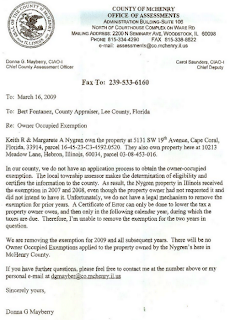 It reads, in relevant part,

“In our county, we do not have an application process to obtain the owner-occupied exemption.

“The local township assessor makes the determination of eligibility and certifies the information to the county.

“As a result, the Nygren property in Illinois received the exemption in 2007 and 2008, even though the property owner had not requested it and did not intend to have it.

“Unfortunately, we do not have a legal mechanism to remove the exemption for prior years. A Certificate of Error can only be done to lower the tax a property owner owes, and then only in the following calendar year, during which the taxes are due.

“Therefore, I am unable to remove the exemption for the two years in question.

“We are removing the exemption for 2009 and all subsequent years. There will be no Owner Occupied Exemptions applied to the property owned by the Nygren’s here in McHenry County.”

I pointed out that the $5,500 exemption appears on the Nygren tax bill this year, which is the 2008 tax year.

“I can’t use a Certificate of Error that raises taxes because of ‘due process.’

“I wrote a letter down there dated March 16th.”