As expected, incumbent Jim Kennedy, he who broke the Republican stranglehold on the McHenry County Board four years ago by defeating incumbent Republican Perry Moy in District 5, has filed for re-election.

A new entrant, Burton’s Bridge )with a Crystal Lake address) resident Lori McConville, has filed in District 3. District 3 comprises all of Nunda Township, which is north of Crystal Lake Avenue, into southern McHenry Township with one Algonquin Township precinct in Oakwood Hills.

McConville led the successful fight against a commercial business servicing contractors on Route 176 near her neighborhood.

In a 2007 web site statement she described the group she head, Nunda Neighbors, as a “small (but powerful) civic committee.” 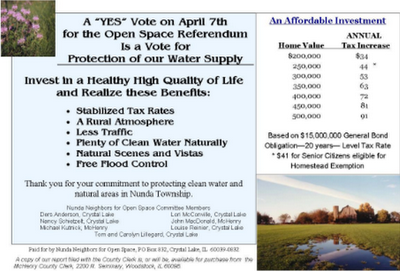 This past spring McConville’s name surfaced as a leader of the Nunda Township Open Space Committee referendum. She is listed by the State Board of Elections as the political action committee’s current chairman and treasurer.

Tax fighter Gerry Walsh and his allies fought successfully against the referendum. Later he noticed that the political action committee did not file its campaign disclosure report on time and filed a complaint. No one from Nunda Neighbors showed up for the hearing.

In the case “Gerry Walsh vs. Nunda Neighbors for Open Space,” the State Board of Elections ordered:

Filing on the first day was Jeff Thirtyacre. He is seeking election to the county board for the second time for the board in District 4, which consists of most of McHenry Township and all of Richmond and Burton Townships.

Above is one page of the proponents’ Open Space mailing last spring.