Traffic will be a major sticking point on Metra’s proposed Ridgefield commuter station the same was it was for the baseball stadium proposed for McHenry County College.

The Crystal Lake City Council unanimously approved Councilwoman Ellen Brady Mueller’s motion to reject SEC, which used to be called Smith Engineering, as the firm to provide the traffic study for the Ridgefield station which Metra wants annexed into the city.

Council members decided they would rather have one of their already authorized consultants do the study.

Metra preferred SEC because it had been contracted to do a study for a future Lily Pond Road site called East Woodstock, as well as for Ridgefield.

Questions about traffic arose from all quarters.

Carolyn Schofield: “My main concerns will be traffic and the watershed.”

Jeff Thorsen concurred, “You’re engineer hasn’t addressed the western development we know is going to come…I’d rather go with our pool of traffic consultants. I’m already looking at two studies that are pretty opposite.”

Thorsen also made the same pitch he made in the baseball stadium traffic discussion–that Briarwood and Route 176 be included.  He pointed out that there had been another accident there earlier in the day.

Kathy Ferguson:  “I have some concerns about traffic. You’re going to change the whole tone and tenor of that area.”

Ferguson also told of driving to the courthouse on Country Club Road for jury duty. She commented negatively on the current danger at the curve.

“The line of sight when you’re coming around those corners has to be addressed.” 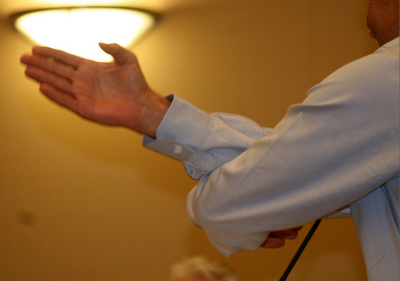 During extended public comment by Craig Steagall, the owner of land Metra considered buying across the tracks from that which is half-owned by McHenry County Board Chairman Ken Koehler, he bent his arms to demonstrate the intersection problem in Downtown Ridgefield.

Mueller talking about traffic: “I don’t know how to make it work without moving the houses that are out there…I myself cannot support having a traffic consultant not going through the normal process.”

Mayor Aaron Shepley empathized with Metra: “It would be awfully difficult to change (horses in midstream).”

Ralph Dawson took a different approach: “What are we going to get out of it? How long will (it take for) my police cars have to be dispatched out there? Why do we want to annex it? We’re already stretched out. I have a county police department that is more than adequate to police that station.”

Metra attorney Joe Gottemoller explained that he thought Crystal Lake wanted to annex the entire watershed of Crystal Lake. The station is within that watershed.

Mayor Shepley summed up the reason for annexing the property: “With an annexation into Crystal Lake you have a greater control on what the project will look like,” adding the city would have more influence over the traffic problems.”

His conclusion: “The deal breaker here—it’s all about the traffic.”