This is the third part of a rather exhaustive article about what happened at last Thursday’s Huntley School District 158 school board meeting concerning how the district is going to spend the first half of a $1.6 million grant from Congress’s Stimulus Plan designated for special education.

In Part 1 and Part 2, McHenry County Blog looked at the public comments of Special Ed Moms. We conclude those comments here and move onto the reaction of the school board members. 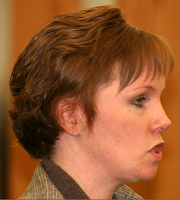 Referring back to what had been presented at the town hall meetings in mid-July, she observed,
“It looks to me like you’re going through what you originally proposed.

Toward the end of a night in which the discussion on this subject ended about 11:15, Superintendent John Burkey was virtually pleading to be given direction.

“If you don’t want to see it, we’ll take it out,” the superintendent said.

The general consensus was the newer board members wanted greater detail.

He pointed out that “the previous Special Ed Director clearly said this was to provide another program.”

The emphasis seemed to be on the word “another.”

“I don’t feel comfortable spending $500,000 on Read 180. I don’t think having the amount of money allocated to Read 180 is acceptable,” Drzal concluded.

“That seems out of whack.”

But the cost and elements of the two programs were not spelled out in enough detail for questioning board members to wrap their arms around the proposal.

Earlier Troy made a point that seems elemental for any government expenditure, but is too often lacking:
“Are there criteria in place to evaluate the effectiveness into saying ‘Yes, it ‘s worth going onto the next step?’”

Troubling to some members was a comment by Comptroller Mark Altmayer. He said that he would order all of the Read 180 licenses and spend the associated expenses immediately, if the board approved the Federal IDEA Stimulus Plan proposal.

“Don’t buy it,” a Mom behind me said audibly.

“You’re basically telling Shawn and I can’t vote for it,” Drzal concluded.

Later he concluded, “There’s no Plan B.”