“A person with her voting record doesn’t deserve re-election,” Farnick told me.

Now, Democrats are trying to kick him and 8th congressional district Green Party candidate Bill Scheurer off the ballot.

No one from the left side of the political spectrum apparently is considered eligible to run against incumbent Democrat Melissa Bean. 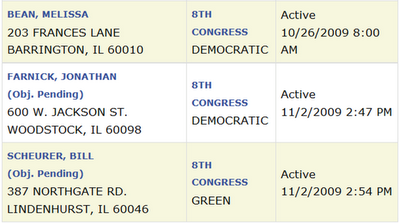 Two years ago, Farnick filed as a Democratic Party candidate and Scheurer’s wife Randi, who was also a candidate against Bean in the primary, filed a successful objection against his candidacy and won. It was based on Farnick’s having too few petition signatures.Gregory Ferritto, 1526 Anderson Trail in Zion, is the challenger to Bill Scheurer’s petitions.

He works for the Post Office and has contributed to the Committee On Letter Carriers Political Education.

There were not challenges among six Republicans running in the 8th district GOP primary.

Jonathon Farnick is seen at the top of the story; Bill Scheurer at the bottom.