This is the firth and final installment of a too long article about the discussion of spending $800,000 of special ed money allocated to Huntley School District 158 this year as a result of the Federal stimulus program. The other stories are here: Part 1, Part 2, Part 3 and Part 4.

Board member Paul Troy brought up the question of staff training. He found $8,000 explicitly listed.

It turns out there is more, but it was not identified in the budget document. It was bundled with other identified expenditures in various line items.

Clearly exasperated by this point, Superintendent John Burkey asked,
“What do you think it should be?

Troy suggested 5%, saying he “would also like to see the general education teachers get it, too.”

“I want the regular education staff to understand the needs of the special ed (kids),” interjected veteran board member Mike Skala. “They don’t have a complete understanding of what it means to be special ed.

“If you tell me that’s what’s going to happen, great, and I’ll theoretically hold you accountable.”

“If that’s what you want, it’s not in here,” Burkey observed.

“General teachers don’t know what to do when a kid has a melt down,” Seedorf said. “Don’t call the kid a name. Don’t insult the kid. Is it impossible to send down a memo that says, ‘If you have a problem with a kid, call Cheryl and (another person)?”

As the meeting moved toward its conclusion, Skaja concluded, “Everything we’ve brought up has been addressed.” 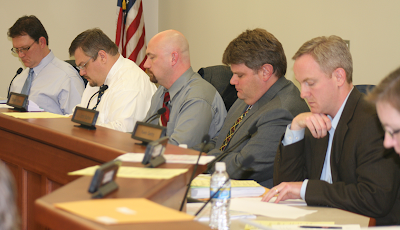 “I think people want a different allocation, but can’t (come up with it).”

Referring back to Comptroller Mark Altmayer’s statement that he would order the Read 180 licenses as soon as the plan were approved, Skaja said,

“Do it slowly, then go forward with more.

“That’s the one item I wouldn’t approve.”

Maybe someone else can figure out how the board will vote when given more detail in the face of a December 1st filing opportunity, but I have no idea.

What I took away from the meeting was that there were not a lot of suggestions the special ed staff professionals made that could not be fulfilled with the money that was available.

If some Read 180 money were to be eliminated by the board, it made me wonder if the Special Ed Moms, who were filled with suggestions at the July 14th town hall-style meeting with administrators and board members I attended, might come up with their own priority list for spending a couple of hundred thousand dollars.

Surely, some of them know enough about the subject to make rational suggestions of what would help their children.

Huntley School District 158 School Board member Paul Troy is on top.  Superintendent John Burkey can be seen just below.

Five of the seven school board members can be seen in the next shot, plus Supt. Burkey.  From left to right are Don Drzal, Paul Troy, Shawn Green, John Burkey, Kevin Gentry and Kim Skaja.  Hidden behind Skaja sits Mike Skala.  Aileen Seedorf sits to the right of Troy.