Yesterday, the first half of a report was published on what happened on the special ed front at the parents advisory committee meeting and the subsequent school board meeting. What follows, concludes that report.

Board member Aileen Seedorf questioned a disbursement to Scholastic Inc. for over fifty thousand dollars in the financial records. Scholastic provides Read 180.

Controller Mark Altmayer didn’t give it up and said he didn’t know.

With some persistence, other administrators fessed up and the cat was out of the bag.

Curriculum director Mary Olsen said all of these licenses were to be used only for regular education students.

Tough to figure out how no licenses had been purchased a week earlier but we’ll wait for the response to the Freedom of Information request. And, if it’s unsatisfactory, I’ll file it again after January 1st when there will be actual penalties for those responding falsely.

Apparently at least one special ed student had been using the Read 180 program when none had been purchased for their use.

Seedorf tried to get the board and Burkey to agree to schedule a presentation by the parents at the next committee of the whole meeting.

Burkey and the board majority turned cold shoulders to both suggestions.

How unreasonable are such requests, considering how the Special Ed Moms have been treated this fall?

They are very reasonable.

In order to get the superintendent and 158 administrators to listen one apparently has to go door-to-door passing out flyers. 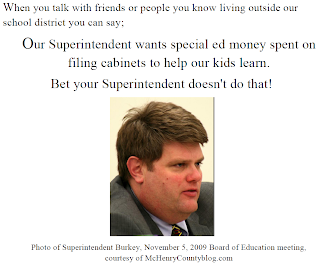 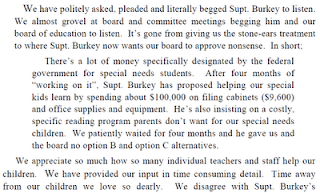 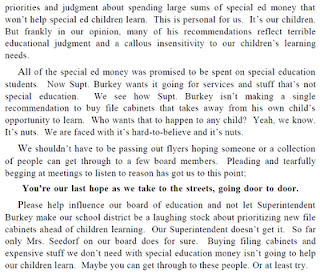 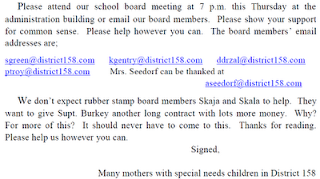 The Daily Herald pointed out how Burkey had “stone ears” in its article and how the parents distributed flyers door-to-door in order to stop this vote and get a revised spending list.

The Northwest Herald observed of the newest revision of how District 158 intends to spend the $1.6 million (which happened after the flyers hit door knobs):

“And the initiative for additional staff development –such as the opportunity to be trained in disability awareness –increased to $450,000 total.”

Parents told the board there had been other items purchased besides Read 180 and there was an internal memo indicating such.

As you might expect, administrators asked for a copy of their own memo, rather than offer to provide the memo to the board with an explanation.

Perhaps the memo has to surface publicly before its existence is confirmed by the administration.

Sort of like how the Read 180 licenses and materials weren’t purchased this year until a special ed parent brought the materials to a board meeting for show and tell.

District 158 is among the model local governments in revealing what will be discussed at their meetings. (In comparison, Crystal Lake reveals nothing more than its agenda and, then, not on a convenient basis.)

But with how it obtained the Read 180 licenses, which it apparently wants to finance with Federal stimulus money and which educational value is clearly experimental for special ed kids, “transparency” apparently means,

“Show us evidence of what you suspect and we’ll admit that’s what it is.”