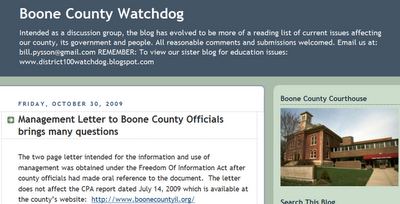 How would you like to be a Boone County resident and read in a county management letter accompanying the annual audit:

“We noted the Collector held over $1 million in savings as of January 2009, which was after the final distribution related to the 2007 tax levy.

“At that point in time, Collector’s accounts should be minimal as distributions have been made for the prior levy and amounts are not being collected on the upcoming levy.

“We suggest the Collector why these large balances exist and determine who this money belongs to, whether it is the County, other taxing bodies, or the state as unclaimed property.”

That’s from the management letter to the Boone County Board. It was dated July 14, 2009.

This article stimulated my interest.