The Daily Herald asked the question, but won’t print the story.

“What’s the question?” you ask impatiently.

Jack Franks will talk to any reporter anytime, won’t he?  About anything?

He talked to the Windy City Times about the heroism of an out of county gay young man who rescued a drowning swimmer, even posed in Chicago for a photo with him.

You can undoubtedly think of many other subjects Franks is willing to talk about, for example, the sham Recall Amendment on the ballot this fall.

Here’s the question that was on the still hidden Daily Herald legislative questionnaire (compliments of Franks’ Republican opponent John O’Neill, who allowed McHenry County Blog to publish his answers):

Will you vote for your current caucus leader?

In his Wednesday column was on a similar mission to find out whether any of Madigan’s minions would dare admit they would not vote for the Illinois House’s boss for 25 of the last 27 years.

Yes or no: if elected,

will you vote to keep

him as House speaker?

Kass points out this is the most important race on the ballot. Even electing Jack Franks means that.

Even though we don’t have access to Franks’ reply to his answer to the Daily Herald’s brilliant question (which was not on the Tribune questionnaire, unfortunately), the Marengo legislator’s silence speaks volumes.

“He (Madigan) controls them like obedient puppies, and they wag their tails and make him speaker and try not to wet the carpet,” Kass explains.

“A few have even said they intend to stand up to Madigan. But once in office, he snaps his fingers and they’re puppies again.” And, Jack Franks has a really good motive to be an “obedient puppy.”

He wants Madigan and Senate President John Cullerton him a congressional seat he can win in 2012.

“Once word got around that I was asking the Madigan question in the former state of Illinois now known as Madiganistan, a strange thing happened: Candidates who normally seek publicity before an election were suddenly indisposed for days.”

The dodge and duck responses are detailed for a number of the candidates before Kass gets to Jack Franks.

When he does, here’s what he says, 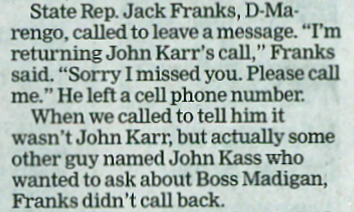 “When we called to tell him it wasn’t John Karr, but actually some other guy named John Kass who wanted to ask about Boss Madigan, Franks didn’t call back.”

The folks he labels as the Madigan 12 aren’t “terrible people. But either they’re owned by Madigan or they’re afraid of him.

“Their silence tells you everything you need to know.

“So, if you vote for any of the Madigan 12, please understand that you’re actually voting for Boss Madigan to run the state…

“And you might want to remember than on Tuesday.”