Personal PAC had just begun what turned out to be a relentless whacking of Brady on his Pro-Life position on abortion.

He was being labeled “an extremist.” 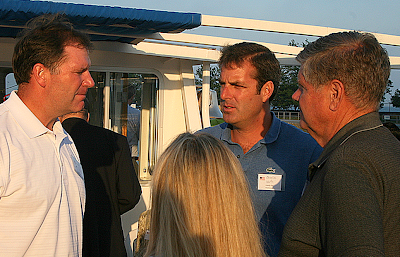 Bill Brady on the 2010 Family PAC Cruise. Jim Oberweis is to the right.

I told Brady that he had to reply.

He told me that his polling figures had actually increased since the ad went up.

After thinking about possible reasons for the counter intuitive results, I’m wondering if there was some small percentage of people who did not know he was Pro-Life who jumped to his side after seeing the ads.

This year Bruce Rauner made his first McHenry County appearance at the Pro-Life Pig Roast at Irene Napier’s home.

Bruce Rauner introduced himself to some of the younger folks at the 2013 McHenry County Pro-Life Pig Roast.

I suggested (and told the other candidates as well, two then and another later) that he should play the abortion card against Governor Pat Quinn the way that Personal PAC had done against Brady—paint Quinn as the “extremist.”

Any Republican with guts enough to point out that a Personal PAC opponent favored allowing mothers to abort their children after 8 months of pregnancy would surely pin that label on his or her opponent.

Rauner gave that idea thought, but obviously decided against pursuing the strategy.

After I talked with Rauner that day, despite his stated refusal to talk about abortion during the campaign, I was satisfied with what he said he would do, if elected.

Now, Illinois Review has discovered that Rauner is talking about abortion in his campaign.

A woman says, “Bruce doesn’t have a social agenda. He’s pro-choice and will leave the marriage equality law alone.”

The two sides of the abortion are “Pro-Choice” and “Pro-Life.”

An update to the article reads,

“After viewing the ad, Illinois Family Action’s executive director David E. Smith told Illinois Review, ‘I’m shaking my head as to what that ad says. The Democrats are doing all they can to get their base out to vote in November, but the Rauner campaign is doing everything they can to alienate their base.’”

If the Libertarian obtains 5% of the votes, the onerous petition threshold will not have to be met for statewide office for the next two election cycles because the Party would have gained the designation of an “established” Political Party.