Revenue Estimate Up; $26 Million in State Grants to be Restored

The State of Illinois has faced continuous challenges in “keeping the lights on” during the final months of FY15.  When the Governor’s office changed hands in January, Governor Bruce Rauner found that the FY15 budget passed by Democrat majorities and signed by former Governor Pat Quinn was drastically unbalanced.  The General Assembly and the Rauner administration have worked together since that time to shift funds around to cover shortfalls.  In some cases, additional cuts were imposed on some agencies and their spending programs.

Citing an improving economy, Governor Rauner announced Thursday that he would restore $26 million to social service and public health grants that were frozen earlier this year because of budget constraints.  Grants for autism, addiction prevention, assistance for homeless, teen REACH and other programs were impacted by the freeze. The Governor was able to restore funding to these programs because of better than expected revenue projections.  The bipartisan Commission on Government Forecasting and Accountability expects an additional $300 million to $500 million in tax revenue because of an improving economy in Illinois.

It must be noted that this restoration is only for the current fiscal year that ends June 30, 2015. Appropriation hearings have just begun for fiscal year 2016.

Following the Governor’s announcement I released an official statement on the issue. Please see The Caucus Blog for more information on this developing budget news story.

The increase in State revenue, reported by Commission on Government Forecasting and Accountability (CGFA) executive director Dan Long to the Senate Revenue Committee on Wednesday, April 29, showed up in checks paid to the Illinois Department of Revenue as part of year-end tax reconciliation payments by individual taxpayers.  The Department of Revenue has reported an increase in capital gains and other income lines reported by individual taxpayers.  The increase could be correlated by recent superior performance by worldwide equity markets, with many widely quoted indices reaching record highs.

As FY15 moves into its final two months, the revenue picture for the year as a whole continues to clarify.  Both CGFA and the State’s other principal budget-control office, the Governor’s Office of Management and Budget (GOMB), are converging on an FY15 general funds revenue estimate of $34.1 billion, net of refunds.  Additional monies of $1.318 billion were provided to general funds through the FY15 “budget fix”, approved by the General Assembly in late March, to generate $35.4 billion in general funds revenues for the year.

This slightly improving revenue pattern for FY15 will not solve Illinois’ spending problems for FY16.  The continued year-over-year impact of the income tax rate rollback of January 1, 2015 is expected to reduce Illinois FY16 general funds receipts below the $35.4 billion number mentioned above for FY15.  Continued urgent actions will be required on Illinois’ ongoing budget crisis. 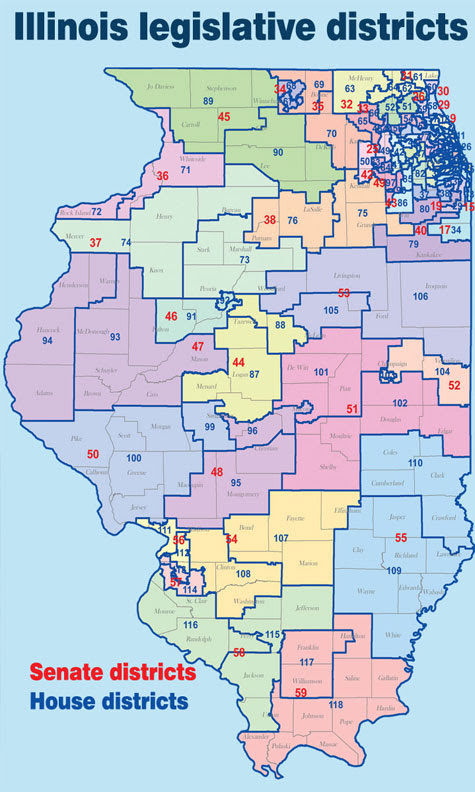 The process used to draw maps for members of the Illinois House and Senate is credited by many observers with a key role in the outcome of legislative elections.  Mapmakers can predict voting patterns and draw “safe” districts for incumbent lawmakers of either political party.

On Tuesday, April 28, a bipartisan Illinois remap coalitionannounced the launching of a petition drive to change the process under which Illinois legislative-district maps are drawn.  Supporters say the proposed amendment could get on the ballot in a future Illinois election if 290,216 Illinois voters sign a petition to request that the question be placed on the ballot.

In a recent survey of my District 66 constituents, 92% of the respondents said they favored taking the map drawing process out of the hands of politicians. This map shows the current House and Senate Districts as drawn by the majority party three years ago.