Earlier segments of this biography of my father can be found below on McHenry County Blog.

That was also the year Dad switched his registration from the Democratic Party to the Republican Party in order to be able to vote for Dwight Eisenhower for president. (Maryland has a closed primary, unlike Illinois’.)

And the state was as Democratic then as it is now.

To understand how Democratic the area was and how significant it was for the President of the Easton Town Council to switch parties, let me tell you about the 1952 Halloween paintings I helped put on the barber shop’s front window.

It was a parade to a haunted house. On a wagon was a sign that said,

A day or so after we painted it, my 5rh grade teacher, Miss Ornett, suggested that I should change the sign to

Compliant child that I was, I did.

The Eastern Shore had always been conservative. Today my birth place is firmly in Republican Party control.

But I remember in 1948 when I was six asking my mother why she and Dad weren’t in favor of President Truman. I am not sure of the answer, but that’s the first political thought I remember…unless watching my mother cry when she heard the news that President Roosevelt had died in 1945 when I was two years and ten months counts. 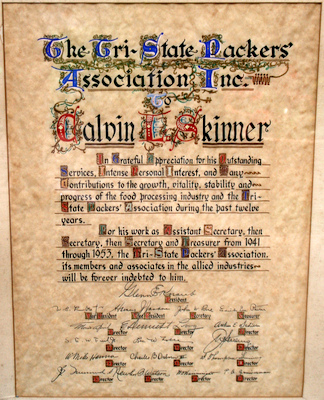 Just as Dad may have been the first to get a student loan, he certainly was one of the first Democratic Party office holders to switch to the Republican Party—all the rage while Ronald Reagan was in office.

My mother, who was the daughter of a Queen Anne County, Maryland, Democratic Party county board member James Clayland Stevens didn’t follow suit until 1954.

Her father was the swing vote who tried to keep the county’s two Democratic Party factions honest after he was recruited by one to run on its slate. In 1953, the family moved to Salt Lake City.
Dad found that he could not get a job at the National Canners Association because the national association did not want to offend its regional affiliate.

So, he looked outside of the food industry.

He found the National Chinchilla Breeders and Marketing Associations in Salt Lake City. It had lots of employees, but was looking to modernize and downsize. Dad did both. The association keep voluminous records of the genealogy of the little animals with the softest fur on earth. He implemented a pre-computer filing and sorting system using cards about the size of 4 by 6 inches with places to punch out indicators around all four edges. 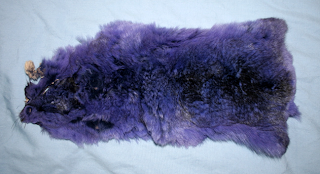 That must have meant there needed to be many, many fewer employees, because by the time he moved the office to Middletown, New York, in 1956, the association did not need very many people.

The office was moved because Dad convinced his board that if the industry was going to survive they needed to sell some pelts for coats and stoles. Since the fur market was in New York City, being fifty miles up the Hudson was close enough to make sales pitches in the city and far enough to avoid the high cost of labor there. The pelt is pretty poor, but the black and gray fur you see above is the natural color. The marketers experimented with dying the pelts blue, among other colors.

After about a year, my father was let go. The board figured his two top assistants earning $5,000 each could do the job he was doing earning $10,000. (My sister Jan covers this much better than I.)

So, Dad was looking for a job while I was a sophomore at Middletown High School. What he found paid less than the NCBA, but it was a job. He was the natural resources man for the National Association of Manufacturers dealing with the big lumber companies, among others.

I suspect he immediately starting looking for a job that paid more and would allow him to see his family more than Wednesday night and weekend. (While Middletown was fifty miles from New York, the same distance as Crystal Lake is from Chicago, the train trip was at least an hour and a half. The track was so bad, the commuters called it the Eire and Lackadaisical.)

He stayed in a single room occupancy hotel in NYC, meeting all sorts of interesting people, as he did in Chicago when he preceded us to take his new job as Manager of the Barley and Malt Institute.

“Tell Grandmom—his mother—it’s about malt, like malted milk,” he told me by phone. (You see Addie Watlin-Skinner in her mid-nineties here.)

Addie Skinner was not one who favored alcohol or cards. She and her husband left the Methodist Church about 1944 because it was getting too liberal. My grandfather Skinner built a Holiness Church near Crumpton, Maryland, where they retired.

Dad came to Chicago while us kids finished the school year. He lived in a single room occupancy hotel.

Dad and Mom decided on Crystal Lake as the place they wanted to live. It had a lake that seemed safer than Lake Michigan.