Before we moved to Crystal Lake in 1958, the Government Improvement League of McHenry County had a newsletter. Dad belonged to the group and became responsible for publishing that newsletter. From 1963 to 1968 the publication became the Public Affairs Newsletter. 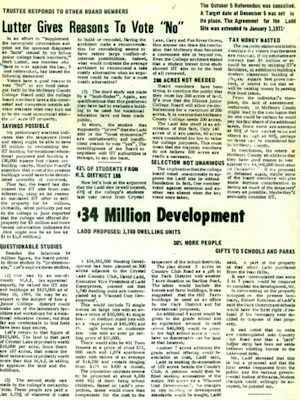 In 1969, Dad renamed the publication “The Star Reporter.” It was a weekly newspaper. (Click to see the arguments by Herb Lutter against the proposed Ladd Site in McHenry for McHenry County College, published in 1970.)

Among other issues, he spoke out about the building of the new courthouse without a referendum. It was built with illegally accumulated surpluses.

That and other “rock turning over” stories must have irritated the Establishment as much and, perhaps more, than McHenry County Blog.

I remember McHenry County State’s Attorney Bill Cowlin, who was first elected in 1968, interrupting a Finance Committee meeting held in the county board room.

He started berating me for an article my father had published saying it was inaccurate. I knew the article was accurate because I had written it. It was about a legal opinion that county treasurers could put up to the insured amount ($15,000 at the time) in savings and loans associations. Dad’s headline was a bit off.

I told Cowlin that it wasn’t the time or the place for such a discussion. He walked out in a huff. (That was the same meeting that the county board members decided to double the number of copies of the 1968 county history book. My father was working on selling them into the 1980’s.)

In 1969, my father again took on District 155. My sister Ellen was bored in high school, so Dad asked fellow church member and Superintendent John Buckner if she could attend some classes at McHenry County College instead.

Buckner replied that would result in the school district losing State Aid to Education.

Buckner didn’t accept the offer, but, starting the year after my sister graduated from CLCHS, its students were allowed to take MCC classes.

Ellen and Dad found a way around her boredom.

She entered the Diversified Occupations program and spent every afternoon working on the Star Reporter.

And, she got paid for it.

In 1970, the McHenry County College Board put a referendum on the ballot to buy land from Ladd Enterprises in McHenry on which to construct a campus. Dad opposed the December 5th referendum, as you can see by clicking on The Star Reporter article above.

80% voted against the referendum.

The next time around, the board proposed the current Crystal Lake site and it was approved.

More of the biography tomorrow.