The edition had been put to bed and the presses had just started running.

That was a long time ago.

In 1962 in what was perhaps the first and only time in what is now a not-so-recent memory, Young Republicans elected half of the student council. We YR’s did it because the student council decided whether the model presidential nominating convention would be for the Democratic or Republican Party.

Six members of the Young Republicans were elected to the twelve-member Oberlin College Student Council. Oberlin is the second most liberal college in Ohio. 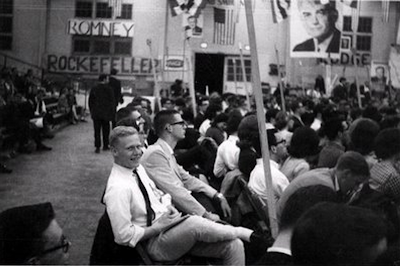 Having observed vote fraud on the part of the liberals the year before, the next year we were prepared with adequate poll watchers in the proportional representation (like Illinois used to have for state representatives before Pat Quinn’s Cut Back Constitutional Amendment) election.

A member of the liberal Progressive Student League “lamented, ‘We don’t know how to behave in a minority.’”

Having spent over two years listening to anything but Republican speakers, we were well-motivated.

I don’t know what he traded to win one of the liberals’ votes.  All we wanted was to have a GOP Mock Convention.

And I wanted to chair it.

Bathory got what he wanted and we got what we wanted.

In any event, I was in the student newspaper’s office on the afternoon of November 23, 1963.

The radio was playing.