Here’s an email from Harvard lawyer Erika Harold, the one who signed up to be the sacrificial lamb against Lisa Madigan, but now has a chance. 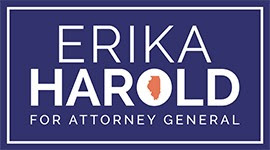 We normally wouldn’t send you two emails in a row like this, but we just got some exciting news that shakes up this race and puts us in a better position than ever before:

According to Capitol Fax: Lisa Madigan just dropped out of the race against Erika Harold for attorney general.

The message sent today from the Madigans is clear: they know that Erika’s momentum can’t be stopped.

Now we need your help more than ever before. It’s time to change the status quo and stop the Madigan Way from squashing reform. You deserve a state government that works for the people, not the powerful.

Will you chip in today to support Erika as she keeps up the fight against the Madigan machine?

We don’t know who they’ll put up next to try and get in the way of reform, but we’re ready, and we need you to be too.

Thanks for your support,