Reprinted with permission from John Ruberry’s Marathon Pundit blog, which is on my list or regular reading:

Your beloved Blogger Laureate of Illinois hit the streets for some good old-fashioned citizen journalism.
This time I was on the North Side of Chicago to cover this afternoon’s anti-violence march that briefly shut down all eight lanes of Lake Shore Drive during rush hour.
The protest’s size grew a little when it entered the Lakeview neighborhood, but  when the marchers entered Lake Shore Drive, according to Chicago Police estimates, there were only 150 protesters.
Let that sink in.
Tens of thousands of drivers–and bus passengers–had their commutes ruined by.
Let’s be real here, a handful of radicals.
Of course the protesters didn’t have a rally permit.
And Chicago officials just let this mess happen.

As they have in the past with similar rallies.

Chalk this up as another reason why Chicago is one of the few major cities with a declining population. 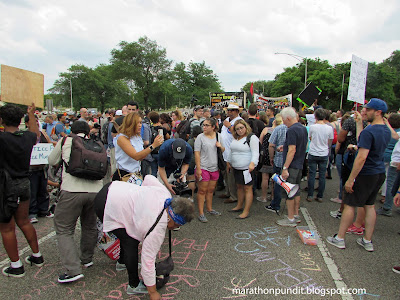 Did I say chalk? Surely these chalk messages scrawled on Lake Shore Drive will transform the gangbangers into peaceful Chicagoans. 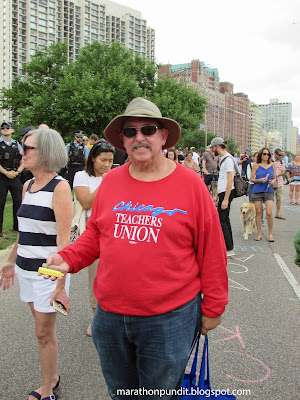 Chicago parents: Do you know where your unionized teacher is? 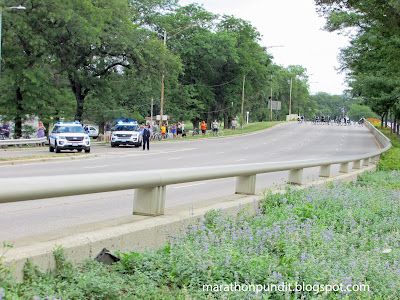 Eight lanes of traffic unused. Thousands of evenings wrecked. All because of, let me remind you, 150 left-wing protesters.

In July the meddlesome priest, the Reverend Michael Pfleger, held a similar anti-violence protest that blocked all twelve lanes of the Dan Ryan Expressway on the South Side.

And do you know what? Chicagoans are still killing each other.

Perhaps a series of rallies in front of the homes of the leaders of the Vice Lords, the Latin Kings, and the Simon City Royals might be more effective. And I can assure you that these gangsters don’t live on major expressways. 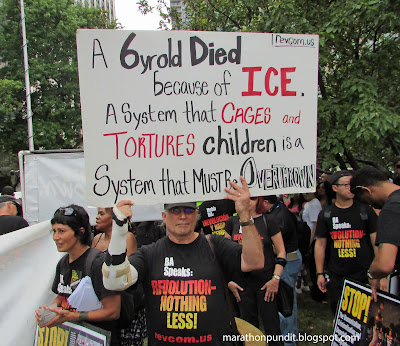 That poster, held by a someone wearing a shirt touting Revcom.us, that is, the Revolutionary Communist Party USA, reads, “A 6-year-old died because of ICE. A system that cages and tortures children is a system that must be overthrown.”

I thought this was an anti-violence protest. Oh, a quick Google search will show that no six-year-old died in the custody of ICE–the commie told me it happened “a couple of days ago.” And that widely-distributed photograph of a migrant child behind a cage was a staged event that was part of a Dallas protest. Allegedly a toddler, not a six-year-old, died after being released from ICE, but the agency denies the report. 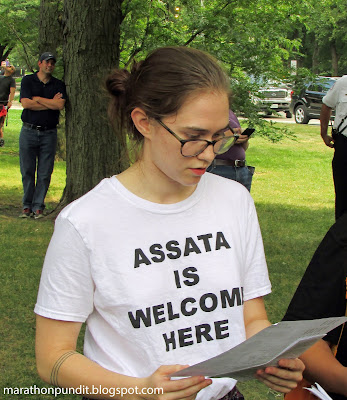 “Assata is welcome here.” Well isn’t that special. But Assata who? If it’s Assata Olugbala Shakur, the former JoAnne Deborah Chesimard, then she is referring to a convicted cop killer–I thought this was an anti-violence march–who is an escaped prisoner living in Cuba under political asylum.

The communists in Cuba should cough up this murderer.

Shakur is on the FBI’s list of most wanted terrorists. 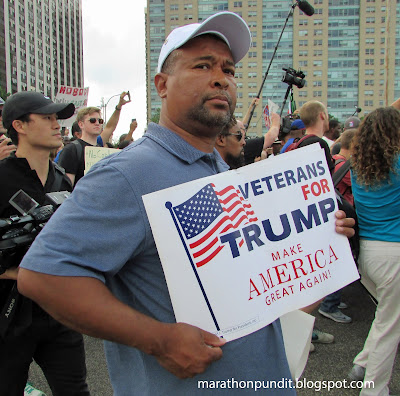 “Veterans for Trump, Make America Great Again.” Here’s one protester who is not a left-winger.

During the 2016 presidential campaign Donald Trump brought up Chicago’s sky-high murder rate more than Barack Obama, a Chicagoan, did during his entire eight years in the White House.

Eventually the protest made its way onto Belmont Avenue, with the ultimate destination of Wrigley Field, the home of the Chicago Cubs. 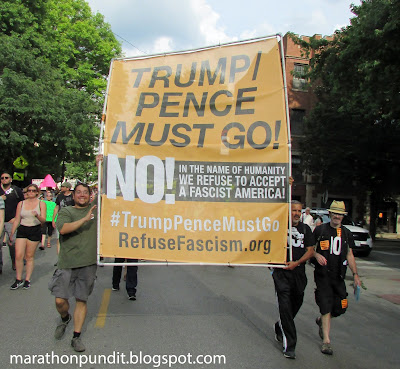 “Trump/Pence must go!” Exactly what does that message have to do with Chicago’s violence epidemic? Help me out here, please. 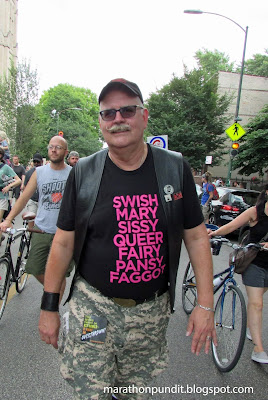 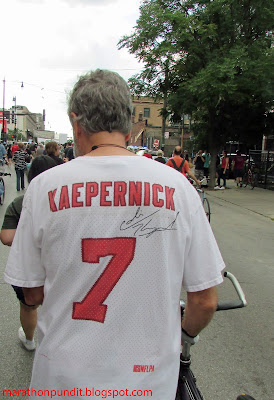 “I don’t always march in left-wing protests, but when I do I put on my autographed Colin Kaepernick jersey.” 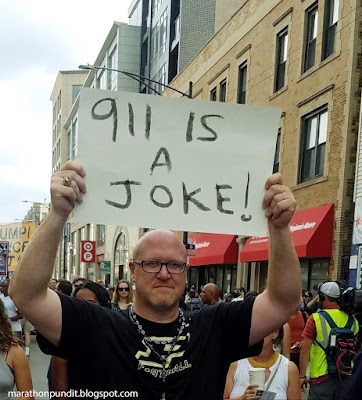 911 is a joke? Really? Is this man a September 11 “truther?” Again, what does 9-11 have to do with Chicagoans slaughtering each other?

Or is this loon claiming that Chicago’s emergency telephone number is a joke?

If this guy’s home is broken into, will he call 911? Or will he dial the cell number of Tio Hardiman, one of the organizers of the protest? 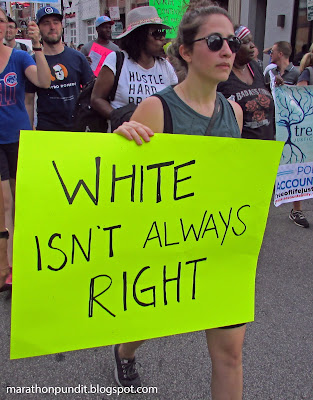 When the left isn’t politicizing everything in sight they are racializing it.

I’ll wager that the woman holding the sign is always wrong.

And just who is saying “White is always right?” 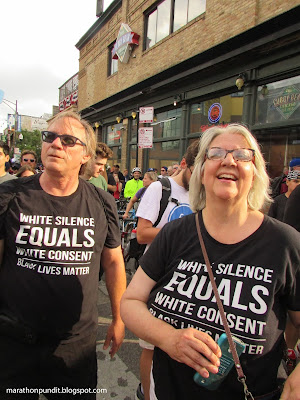 The couple that protests together stays together. 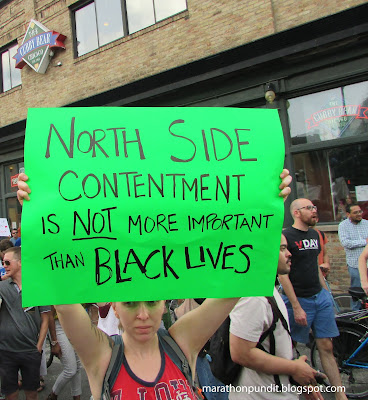 Hmm…same color poster board as the sign two pics up. Same handwriting too.

“North Side contentment is not more important than black lives.” Who thinks like that?

Some of the racializing this evening used dog whistle terms. “North Side” is white. “South Side” is black. In a majority-minority city, what does that really mean?

Oh, of Chicago’s 77 official neighborhoods, Donald Trump prevailed in only one–Mount Greenwood on the South Side. 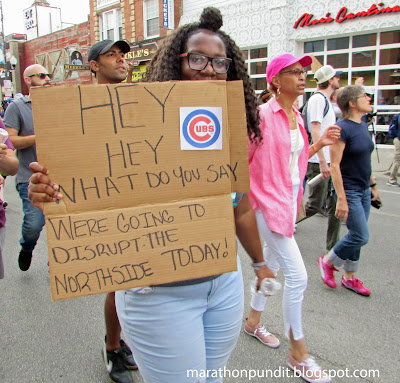 “Hey, hey, what do you say, we’re going to disrupt the North Side today.” 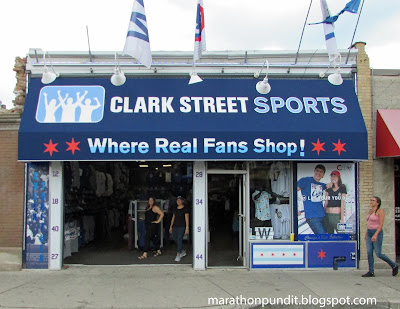 Business was slow at the bars, restaurants, and souvenir shops near the ballpark. 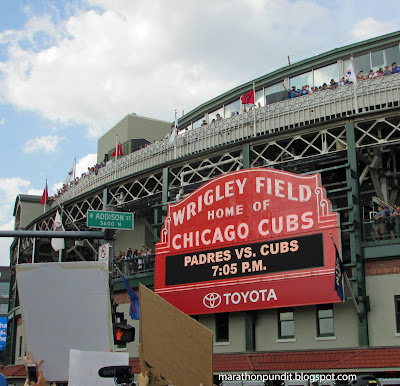 Eventually the scrum made it to Wrigley Field. Oh, the Cubs ended up losing this game to the Padres. 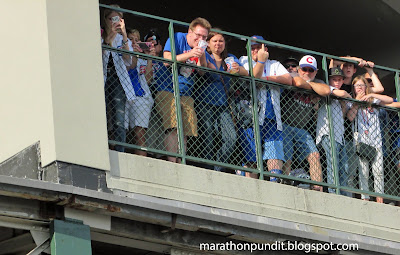 Cub fans look down at the rabble. Oh, take a good look at the man in the Cubs hat. He’s giving the protesters the finger. 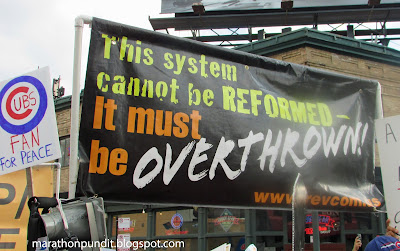 The communist banner declares, “This system cannot be reformed. It must be overthrown.”

A radical from the Students for a Democratic Society–a 1960s group that counts Bernardine Dohrn and Bill Ayers’ terrorist Weather Underground as one of its descendants–once wrote, “The issue is never the issue. The issue is always the revolution.”