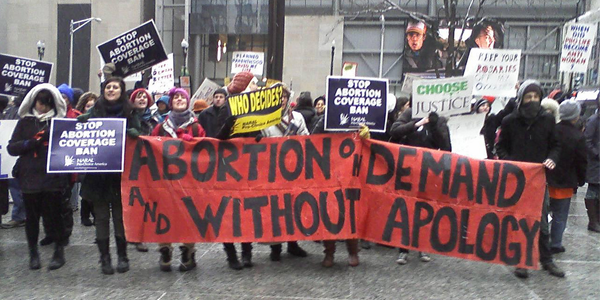 Unlike Bill Clinton in his 1992 contest against George Bush, Brady never responded when he was attacked. On the abortion issue, he stood there like a punching bag and took the blows.

I talked to him at the Family PAC cruise in the week after the devastating TV ads first appeared. My advice was that he had to do more than ignore the ads and hope for the best. Bill’s response was that his poll numbers had gone up since the ads began. (I believe that might have occurred because a small number of pro-lifers did not know he was pro-life.)

In any event, it appears Brady followed the typical advice of GOP Establishment political consultants. He did what Republicans traditionally do: let pro-lifers know you are pro-life, but otherwise ignore the abortion issue. And, he lost the gubernatorial race to Pat Quinn by 31,834 votes.

Former Illinois State Representative Penny Pullen (R-Park Ridge) used that approach in her 1990 GOP Primary against Personal PAC candidate Rosemary Mulligan. That was the very close election that put “hanging chads” in the political lexicon. The same approach on abortion was taken by Pullen in 1992. Pullen mobilized the pro-lifers she could identify and let Mulligan paint a picture of her supposed “extremism” on abortion to the rest of the electorate.

Then she and Texas political consultant Kevin Burnett formed Life Advocacy, an organization that teaches seminars to pro-life candidates on how to address the abortion issue. They advised a more aggressive approach to the issue.

Now, let’s look at the Joe Walsh re-election bid against Tammy Duckworth. Anyone who watched the 2012 WTTW debate would have had no doubt as to who the better candidate was in that Duckworth fumbled many questions. Then, in an email to the Chicago Tribune, Duckworth said she did “not support any restrictions on a woman’s right to choose or her access to safe, affordable reproductive health services.” That truly extreme position appeared in print editions. Just as with the Brady gubernatorial campaign, Personal PAC viciously attack Walsh as an “extremist.”

But, who was the extremist in 2012? Was it not Duckworth with her support for abortion even up to the day before delivery?

Brady, Pullen and Walsh were all branded “extremists,” did nothing to defend themselves and lost.

Walsh’s margin of almost 10 percentage points in this 8th Congressional District race probably means that even going on the offensive on the abortion issue would likely have not garnered him enough votes to win, but we’ll never know.

Now, let’s look at last year’s suburban congressional debacle. We lost two usually outspoken pro-life U.S. Congressmen: Peter Roskam (R-6th District) and Randy Hultgren (R-14th District). Roskam came up 22,556 votes, while Hultgren lost by 15,871 votes. And what was their pro-life strategy? The same as Pullen’s in 1990 and 1992, Brady’s in 2010 and Walsh’s in 2012. Their strategies were anemic.

My wife received a letter from Roskam telling her he was pro-life, and Hultgen held a lunch in Crystal Lake for pro-lifers. Neither did anything like what Personal PAC did in opposing my campaigns for state representative. Personal PAC called all women in the district asking if they were pro-choice and then called back every woman who had answered in the affirmative to remind them to vote appropriately.

Did Roskam and Hultgren spend any part of the millions they had available on TV ads trying to identify more pro-life constituents? Not to my knowledge.

So, will aggressively addressing the abortion issue by highlighting the extremist nature of Democratic positions work? There is no way to know until some well-funded candidate tries it.

If Susan B. Anthony List had enough money, it could try branding a pro-abortion Democrat as an extremist, just as Personal PAC has done to Republicans in the Chicago media market. Or Republican legislative candidates can continue following the cowardly recommendations of traditional Republican political consultants and continue losing.

How many Americans want abortion to be legal throughout the entire nine months of pregnancy? According to a May 2018 Gallup Poll, only 13% of Americans support abortion in the last trimester, and only 29% believe “abortion should be legal in any circumstances.” It is Duckworth’s position–not Walsh’s–that is extreme and non-representative of the views of most Americans.

What if a statewide candidate targeted black media with the racist background of Planned Parenthood’s founder, Margaret Sanger? What if a candidate shared that although blacks constitute 13.3% of the population, 36% of abortions were performed on black women? As a state representative, I once heard on the Illinois House floor a liberal, white Republican woman comment on a bill that was aimed at increasing the opportunities for abortion. “Too many black babies,” I heard this woman say as I walked past her. Without identifying her, I conveyed the racist motivation behind the bill to a female black Democratic Party colleague. That colleague then circulated among the other black women on the floor and votes started changing to the extent that the bill failed.

What if a candidate were bold enough to create an ad campaign that showed babies in the womb or featured Down Syndrome children who were spared the usual fate of babies with Down Syndrome, while casting pro-abortion candidates as extreme, lacking in compassion, and opposed to the inclusion of the least of these in our communities?

It’s time that Republicans speak the truth. It is those who support the intentional killing of humans in the womb who are extremists. Saying nothing in the face of being labeled “extremist” has proven to be electoral suicide.