Wirepoints has analyzed twenty factors that explain how Illinois got in the mess that exists today.

You can read the entire article by  Ted Dabrowski and John Klingner now or wait and comment on each of the twenty segments, republished with permission, of

There’s no arguing that Illinois is a wreck. But read Deputy Gov. Dan Hynes’ new “budget” report – meant to grease the skids for Gov. J.B. Pritzker’s first budget address – and you might get the impression that former Gov. Bruce Rauner alone caused that wreck. Hynes’ report, “Digging Out: The Rauner Wreckage Report,” says that Rauner ran the state “into a ditch.” His list of complaints against Rauner is long: more deficits, unpaid bills, increased pension costs, higher ed struggles, a social service crisis and more.

We won’t defend Rauner. His four years were a failure, full of blunders, lost opportunities and about-faces. And the Rauner/Madigan impasse certainly made things worse.

But Wirepoints wants to set the record straight. Illinois was a fiscal and economic basket case long before Rauner stepped into the governor’s office. No amount of anti-Rauner rhetoric should let Illinoisans ignore that reality.

Ignoring history – or reframing it as the Pritzker administration wants – makes it impossible to properly diagnose what’s really wrong with Illinois. And far more importantly, it gives Pritzker cover to pursue the same policies that preceded Rauner.

No one should forget how dysfunctional, corrupt and broke Illinois was in the years before 2015.

Two former governors were jailed for corruption just five years apart. Unpaid bills in 2013 had already reached a then-unprecedented $9 billion, wreaking havoc on social service agencies. Multi-billion-dollar budget shortfalls were the norm and Illinois’ $100 billion pension crisis became the nation’s worst. The state was hit with 13 credit downgrades under Gov. Pat Quinn and by 2010, Illinois was already the nation’s lowest-rated state. Worst of all, Illinoisans were leaving in droves. Illinois lost a net one million people to out-migration from 2000 to 2014.

But the Pritzker administration wants Illinois’ crisis to be all about Rauner. We get that – it’s politics as usual to blame the predecessor. But there’s more to it than that. If Pritzker can pin all of the state’s failures on Rauner by leveraging Illinoisans’ strong distaste for the former governor, then Pritzker’s “solutions” – a collection of tax hikes, pension bonds and new spending – become easier to swallow.

History, however, shows those same policies under previous governors got Illinois into crisis.

Wirepoints offers 20 charts and short commentaries to make our case. 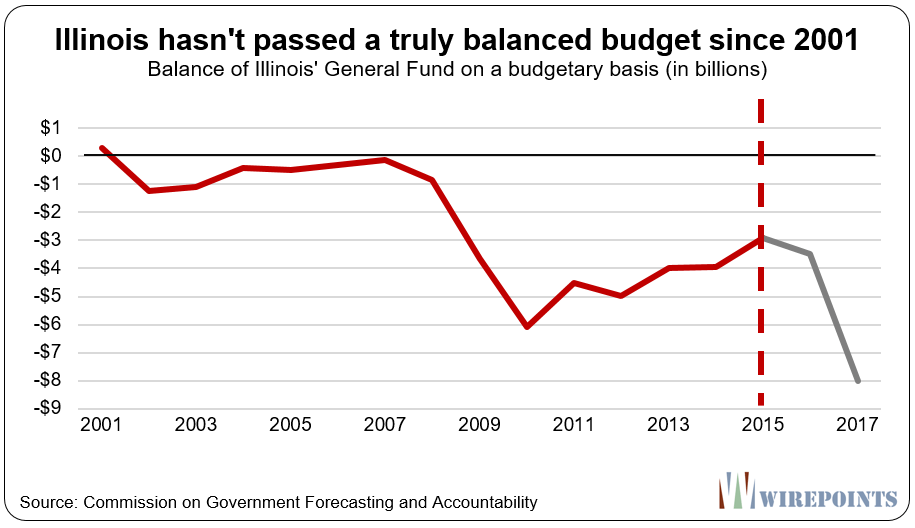 It’s important to note those deficits are based on the state’s rosy accounting rules. When the true costs of Illinois’ retirement debts are accounted for, the real deficits are billions worse each year.